Harley – Darly has not perfected the “art of sharing”. I know he’s the oldest, but I’m not sure age is really a factor. I’m beginning to believe dogs just don’t “share” in the same manner as you and I.

I understand (to a certain extent) the whole “alpha dog” syndrome thing, but for my two – they never fail to entertain me. Harley has a soccer ball in the yard that he’s touched maybe twice in well over a year, he prefers the other five balls and outdoor toys thrown all over the yard. Leo recently fell in love with this soccer ball, so now “it’s on and popping” when we go outside.

I try not to get involved because there is never any display of aggression or serious fighting. I just attribute this behavior as “natural dog stuff”, and I prefer to let them just work things out. To eliminate chaos though, I bought two more soccer balls and thought “problem solved” – NOT! According to Harley, the toy of Leo’s choice is the ONLY thing worth having. Like my children, I don’t expect the boys to always play nice. I know there will be those moments when they’ll play well together one minute and then wrestle over an object they both want to play with later.

Recently Harley has become a “hoarder.” If Leo shows any interest in the contents of their toy box (yes, they have toy boxes), Harley goes and gets out a few items and places them in his area as if to say “you can play with anything but these…” I actually watched this play out the other day in complete amazement. There was one stuffed animal (the purple bird) of particular interest to Leo that Harley coveted. Leo was not crazy, there was no way he was going over there and taking it, so he laid down on his pillow and decided to wait Harley out, (as if he sensed (or knew) grabbing this toy from Harley wasn’t a smart idea). 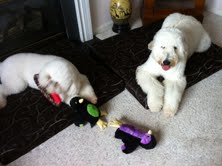 I decided to stay in the room and watch this wild kingdom vignette play out.  Leo pretended to go to sleep as if planning some secret attack.

Can you guess what happened? Did Harley give in? Did Leo give up? Stay tuned, but I’d love to hear your ending of the story….