The bond between dogs and children is utterly amazing! It will captivate and almost hypnotize you when you see it happening.

I must confess though, I never paid “close” attention to the interactions until Harley & Leo entered my life. Now I am consistently fascinated with the unspoken language between the two.

You may recall THE LITTLE RASCALS, a story posted about our neighbors moving away… 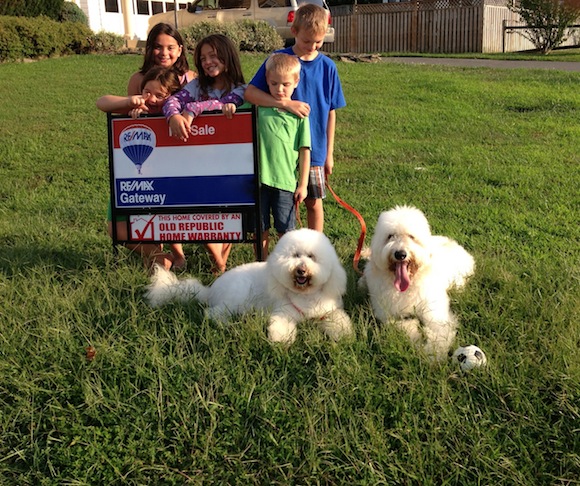 This was a sad day for the neighborhood

This was not only an adjustment period for the other neighborhood children, but for my Boys as well. Two little (two legged) boys, ages 5 & 8 were no longer around. No joke – Leo and “Wilson” took it the hardest.

I had hoped in time memories of them would gradually fade and he would happily settle for “me” throwing the ball and chasing him around the backyard.

But as fate would have it, I do not have to add that to my job description!

New neighbor sightings started about a week ago. DH made initial contact. Men love talking trash (as in truck pick-up schedules), lawns, fertilizer, and weed killers! Over the course of the day we met his wife, his mom, and a few other relatives who stopped by to see the new home and wish them well.

My heart skipped a beat when I heard them say they had two boys 6 & 9 years of age.

Appropriate or not, I had to ask, I just had to:

The father said he really wasn’t sure. They never really interacted with dogs, and he wasn’t sure how they would react around “big dogs.” This wasn’t sounding too positive to me.

Oh, he covered it all, he even described their personalities:

He went on an on. At one point I wondered if he was trying to close a sale!

However the father remained reserved and expressionless.

So now it’s the weekend. A typical September Saturday on our block. Sounds of children playing, lawn mowers roaring, and my two occasionally barking for additional attention – filled the air.

I eventually came out to capture some photos and was pleasantly surprised to see the “new kids on the block” outside too.

What I saw warmed my heart. I saw the magic.

I watched in awe at:

Later that afternoon while on the computer, a comment came across the screen from anipal and reader “Sheila” (doodle mom to Finley). SIDE NOTE: I ruv when readers comment on my stories “hint-hint”, because it’s such a cool way for me to talk with new furrends.

Although Sheila’s initial comment referred to a recent post WILSON & LEO BANISHED TOGETHER, it was her second paragraph that made me smile…

Here in Doodleville, we love “comments”

Someone else wanted to know what I had just found out. So Sheila – this one’s for you….

When I came outside, this is what I saw… 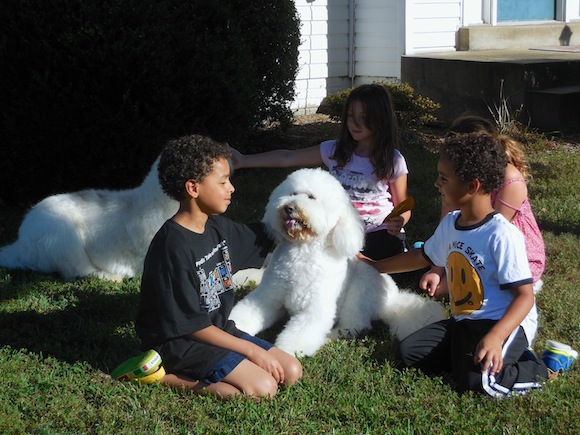 Everyone under the tree… 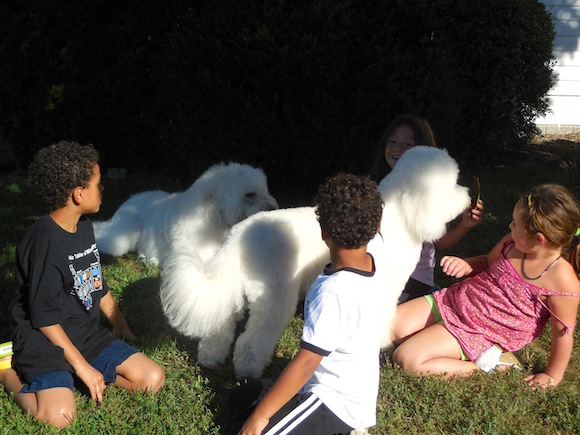 The incredible bond between dogs and children 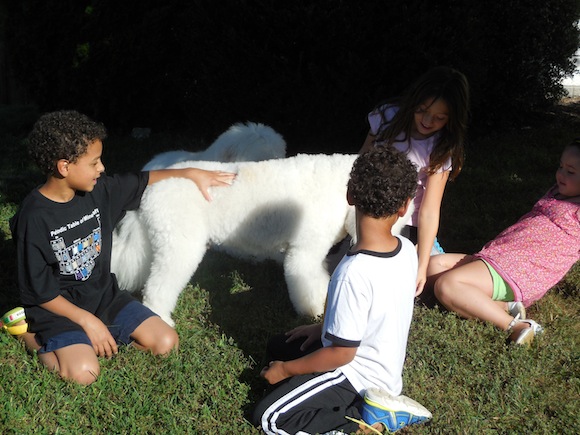 A language of their very own 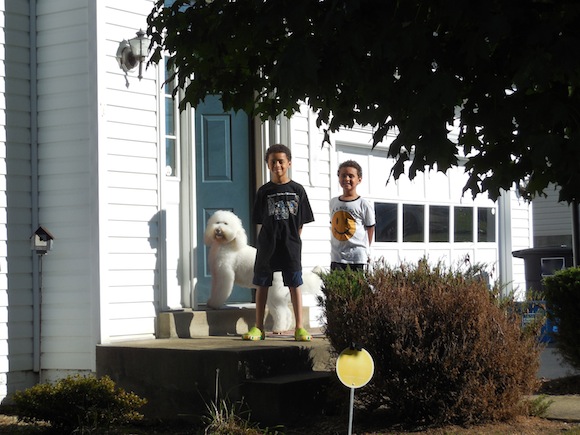 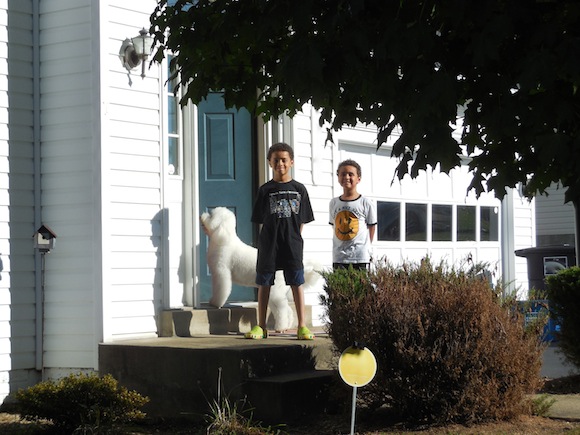 “Allow me to introduce myself – I’m Harley”

In one afternoon the new “rascals” felt so comfortable with Harley & Leo, it made pawfect sense to take them in the backyard to see what they were made of. It was “ball playing time”... 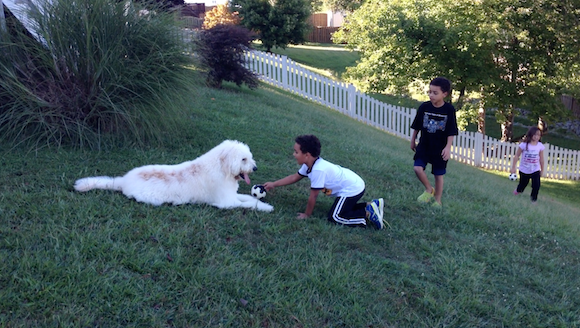 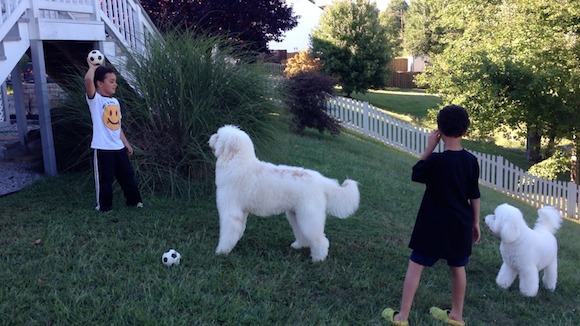 On your mark, get set… 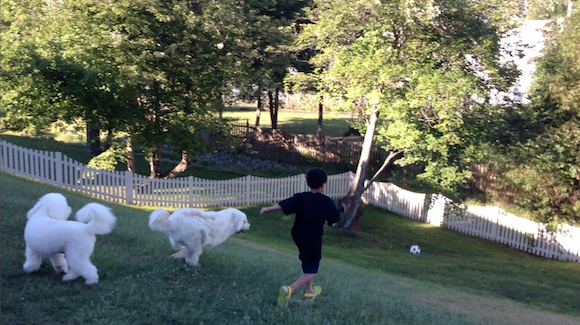 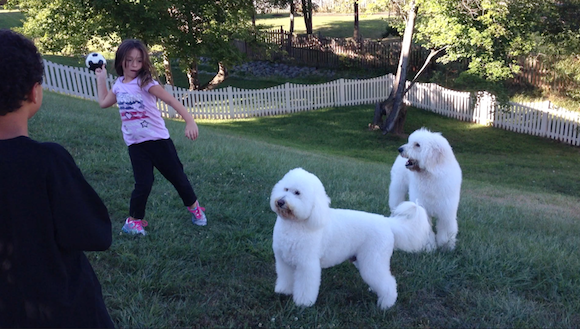 This is called the “wind-up” pitch

Our Gang is back in business… 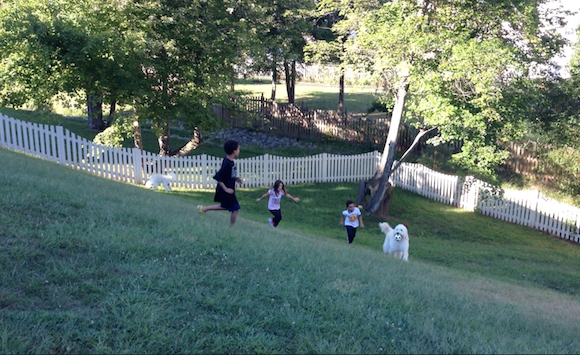 The Boys have been blessed again with “groovy” (pun intended) neighbors