I don’t know about you, but I remember being told that “dogs eat grass because they’re ill, and it makes them vomit, then they feel better.” Never made much sense to me, but then I didn’t own a dog back then either.

Harley comes along, and somewhere between his second summer season and Leo’s arrival in the fall, he became a “connoisseur” of the “green stuff.” In the morning, he will scratch at the back patio door, even if we’ve just returned from a long walk. I’ll let him out and watch as he goes to a corner of the yard and starts munching on the lawn… 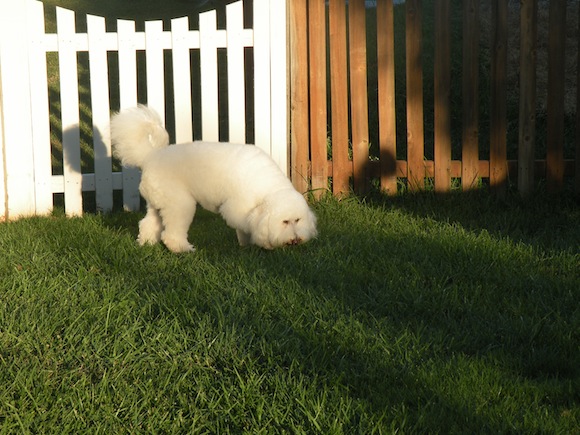 When he went for his physical, I asked the vet about it, because once he’s nibbled on the grass, he’ll come bouncing back to the house and resume his regular morning activities. The vet said perhaps Harley suffers from some form of “acid build-up” during the night and needs the grass to calm his upset stomach in the mornings. Even if he doesn’t vomit afterwards, he still could have that empty “gassy” feeling. Her suggestion? Give him a little snack before bedtime.

Now before bedtime, we must take a detour to the “treat jar” for what my daughter has coined – his “antacid” before we go upstairs. Meanwhile, I decided to do some reading (you know me) to find out more about this “grass eating” thing, and found some interesting facts from Pet Med (visit their site)
http://www.petmd.com/dog/wellness/evr_dg_eating_grass

Apparently: “Dogs love to munch away on grass, and some even make it part of their daily routine.”

The article also went on to say:

“The modern dog, partly because of evolution and domestication, is no longer like its ancestors, which frequently ate their prey entirely, including the stomach contents of plant-eating animals. Instead, dogs today seek out plants as an alternative food source. Most commonly the plant is grass — since that is what is closest at hand.”

I must be honest and say that “on occasion – though rare” Harley has “barfed” after eating more than his fair share of grass, so I also wanted to find out, “why grass?” As I continued to read, I came along this tid-bit of info:

“Clearly, dogs can find their nutrients in a wide range of plant foods, but that doesn’t explain why Fido usually throws up after eating grass. A dog will seek out a natural remedy for a gassy or upset stomach, and grass, it seems, may do the trick. When ingested, the grass blade tickles the throat and stomach lining; this sensation, in turn, may cause the dog to vomit, especially if the grass is gulped down rather than chewed.”

But the following paragraph REALLY best described my doodle…

“Although dogs don’t typically graze on large amounts of grass like a cow, they may nibble on grass, chew on it for a while, and not throw up (an unwell dog will tend to gulp the grass down in big bites and then throw up). This may be because they find the texture of the grass palatable, or just because they need to add a little roughage to their diet.”

Grass could be a “Nutritional Necessity”

Pet Med also went on to say: “Whatever the reason may be, most experts see no danger in letting your dog eat grass. In fact, grass contains essential nutrients that a dog might crave, especially if it’s on a commercial diet. If you notice that your dog has been munching away on grass or houseplants, then you may want to introduce natural herbs or cooked vegetables into its diet.”

I did go through a period where I tried to offer/introduce fresh carrots and green beans into their diet – for my two, it wasn’t a hit. They both liked the carrots (not for long) and instantly despised the green beans.

BE MINDFUL: “grass munching isn’t that bad at all. However, watch out for a sudden increase in grass eating; it could be a sign of a more serious underlying illness that your dog is trying to self treat, and that requires immediate veterinary assistance.”

Pet Med gave me a fantastic idea, because I do worry about him eating “just any ole’ grass from anybody’s lawn”, so I think I will take a small tin basket or children’s bucket from the dollar store, fill it with soil and grass seeds, and take their advice….

“…buy a small tray of grass just for the dog, or start an herbal home garden. This will give your poor pooch an alternative to the outdoor grass and landscaping, the eating of which could lead to accidental ingestion of pesticides, herbicides, or chemicals that have been used to treat your (or your neighbor’s) yard.”

I can leave it by the water dish in the laundry room and see what happens.
What about “Leo” you ask? He could care less about grass, he’s into SOCKS– remember?!