Thursday afternoon my heart was shattered when what started out as a simple cough on Sunday, led us to the vet on Monday, turned for the worst on Wed with labored breathing.

I took Leo back to the vet on Thursday, to rush him to the hospital and less than two hours later he collapsed.

Specifics right now are not that important to me, perhaps at a later date I will be able to share to help someone else. For now – the best I can tell you is that he succumbed to a nasty viral bacteria (airborne in nature) which did horrible things to his lungs in a very short period of time.

My baby is gone… 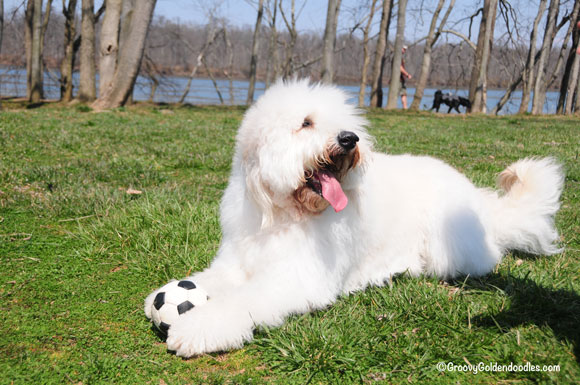 I don’t know what to do…

Leo just celebrated his fourth birthday in May. Weighing in at about 98 pounds, he was the largest – most awkward dog I had ever fallen in love with. He stole my heart at first glance.

Leo put the “Groovy” in Goldendoodles. All my “Wilson” posts were true and accurate because he and his beloved soccer balls (I believe there were at least 11 in his life time) were inseparable.

Right now nothing makes sense. I’m not functioning too well and neither is the rest of the family, including Harley. He was able to say goodbye, and I believe he understood, but his rhythm is off.

He is very sad, and I’m trying to help him.

I will need sometime to work through this loss. For the last several years when a tragedy hit home, I would turn to my writing. This time half of my “Groovy Goldendoodles” is gone, so I don’t know what to write. I cannot fathom life without Leo.

I don’t know what to do…