FIRST: I am not crazy…
SECOND: There are plenty of people out here just like me…
THIRD: I’m looking for a full body rain suit for the boys!

I have developed such a love/hate relationship for the snow these days. I love the way it looks, the feeling that comes over you when you stand in the window drinking something hot watching someone else shovel it from your walkway! I delight in the sound and sensation under your shoe when you walk across the white powdery stuff for the first time. I still take pleasure seeing just how far I can throw a snowball, regardless whether it reaches its target or not. And OMG, once Harley came along, I loved playing in it with him, and Leo’s presence was like the cool whip on top of the apple pie. The two of them in the backyard, romping around, tackling each other, tackling me, chasing my snowballs, eating them if caught in mid air. Great stuff….But I absolutely loathe the endless hours pulling, pinching, blow drying and cursing the millions of ice balls stuck to their hair – UGH! They’re exhausted and want to lie down, I’m freezing and cold, we’re both in dire need of some separation time from one another, yet we’re hostage in the laundry room for what seems like an eternity. So I’m determined to find full body suits for them before the big one comes! I originally wanted just a rain suit, but my daughter found “snow suits” and sold me on them, said they were quilted, reversible, velcro, perfect for the snow. I gave her a thumbs up, she placed the order, and we waited for them to arrive.

You can imagine my delight when the box came: 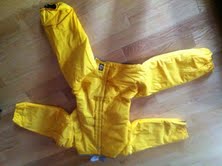 After I tore open the package and we “oohed” and “awed” I grabbed Leo, his size made the search difficult, so I wanted to “dress” him first. He is such an “easy going” fella, he’s like that green cartoon character from years ago “Gumby” he just bends in whatever direction you want. Once I got all four legs in, and closed it from the top, the poor boy just stood there. We called him, begged him to take even a half of step forward. He wouldn’t budge. If the house was on fire, he would have died right there! We unanimously agreed it was a tad too snug, so I took it off and THEN he walked away from me!

I looked at Harley, trying to will him to cooperate. I got his suit on, and it was a much better fit, but when I asked him to walk towards me I thought I would lose it completely. He marched as if his legs were in a cast. He wouldn’t bend them at all. These yellow sticks just shot out from underneath him, as you heard this “swishing” noise from the material. My husband yelled from the other room for me to “please take that off him”, my daughter was almost on the floor, but poor Harley continued to march to his momma!

UPS has the suits now, they are on their way back to the manufacturer – I tried, but this was not the way to go, not for the boys. I haven’t given up though, oh no, because the snow is coming!
Harley kept his distance the rest of the day, he stayed in the family room most of the afternoon giving me this glare:

Leo? I have no picture, he vanished completely – so I respected his privacy.

I’ll show you my next purchase as soon as it comes. Yes Lee, I’ve found something else…