Lights, camera – no action Jaxson! One minute he was ready to make a fun mini vignette about pet therapy… 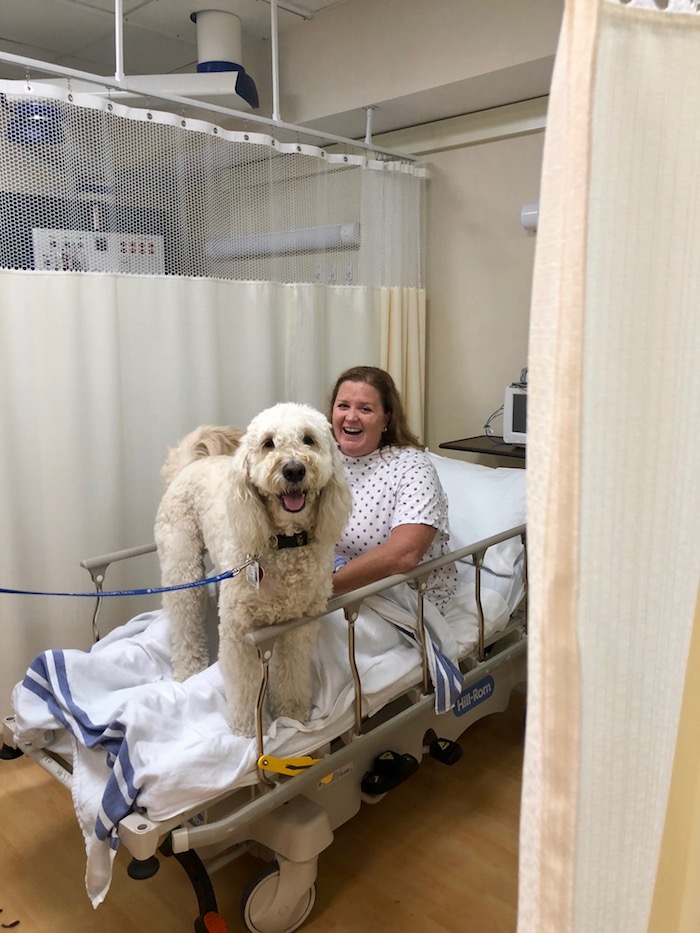 Could it have been Charlie the Mascot of the Charleston River Dogs Minor League Baseball team?… 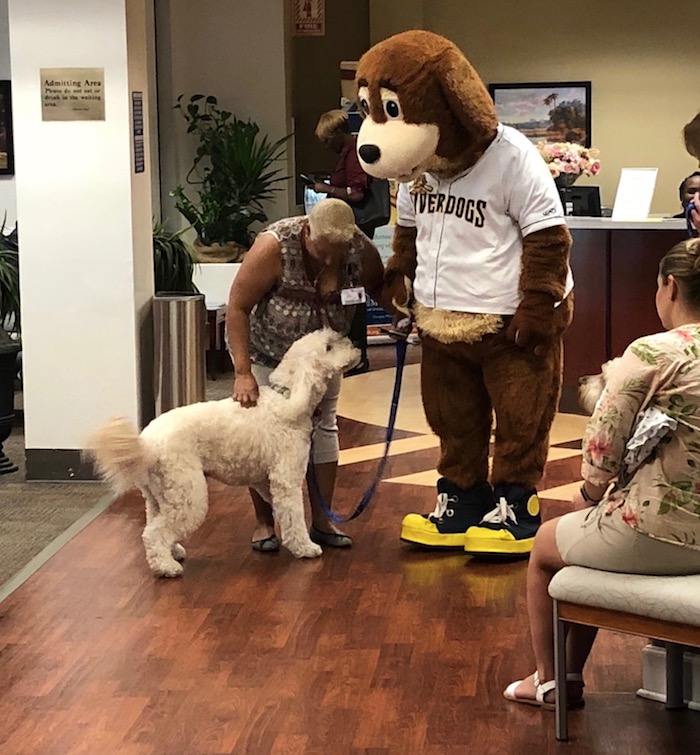 I think so – check out that stance… 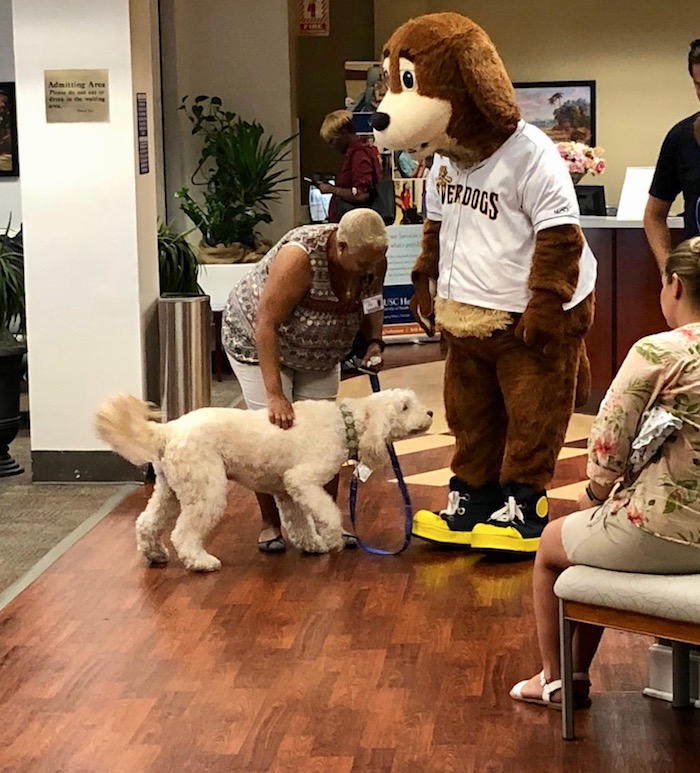 The hospital and the Charleston team work very closely together. The organization hosts “dog day games at the park” for peeps and their pups to watch a few innings sipping $1 beers and munching $1 hotdogs.

Our Volunteers and their dogs love to hang out on those nights and share information with the hundreds of pet parents at the stadium. #recruitingtool

Recently I was asked to come up with two short scripts for their videographer to record, for the jumbo screen during home games.

We taped the first one today. A few volunteer teams, a “not-so-real” doctor, along with employees as patients. All of this was staged to demonstrate to their mascot how he could become a therapy dog. 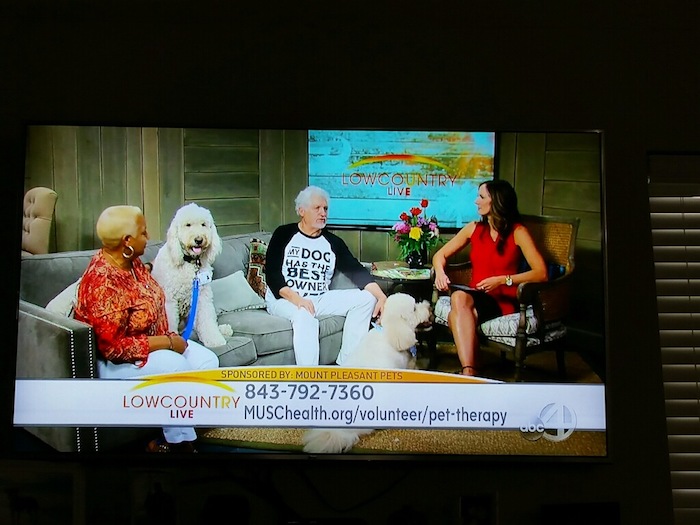 Not the case. Not at all.

THE FEAR IS REAL –

Oversized costumed characters or people wearing masks can be scary to your dogs. A close encounter can raise his level of anxiety making the photo-op just not worth it.

When I noticed Jaxy’s hesitation, I immediately pulled him away and reassured him that everything was going to be alright.

I gave up our spot in the scene, and directed from the sidelines. #DoodleMomScorsese

After about 30-40 minutes, after watching the other dogs interact with Charlie, Jaxson became a little more relaxed near him, just not next to him… 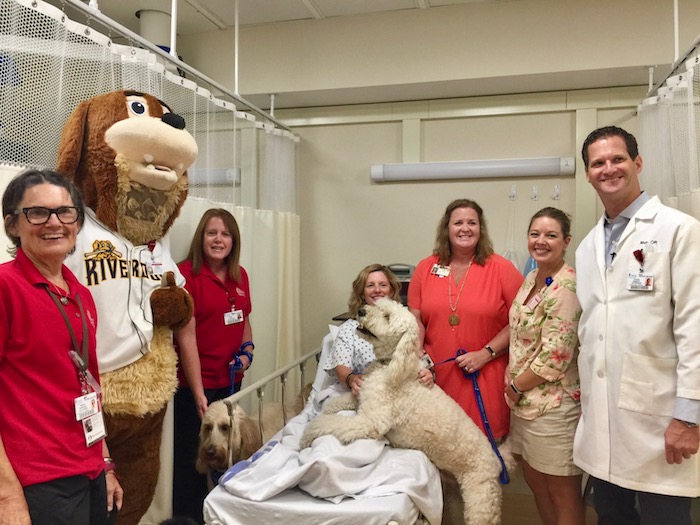 By the time we left the unit, he was fine walking close – not too close, but still in the same cluster. #pawgress

I can’t help but wonder how Jaxson would have handled meeting the Mascot if Harley had been present too.

Going to work with me, having to navigate lot’s of new “everything’s” all on his own is very different for him. Jaxson has had Harley to lead the way his entire young life. He’s watched Harley and trusted his judgement always.

He was quiet for a while when we first returned. Talk about the pawfect time to have a pet communicator on speed dial.

His therapy friend Pete, stopped by and laid down with him for a while… 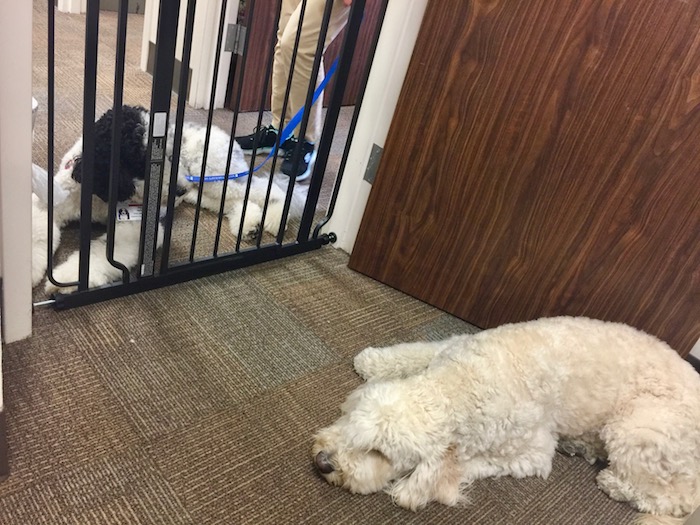 They shared some thoughts of the day #Ithink

How does your dog react to large mascots?