Did I ever tell you Leo was afraid of the weirdest things? He has the strangest reactions to the oddest of objects:

So as we enter the months of June, July & August, I have been preparing myself for the “seasonal inevitable”.…the “summer thunderstorms.”

When it comes to thunderstorms I’ve always known: Dogs may develop a fear of thunder/lightening. This can range from mild to severe from dog to dog.

I have also heard: Dogs may also be able to sense a thunderstorm coming well before you are able to detect it. This is the reason so many dog owners report seeing their dogs exhibit signs of fear several minutes or longer before the storm actually hits.

Harley never exhibited such behavior, but given Leo’s – let us call it – “unique” hang-ups, I have been “on-call” sort of speak, waiting to go through and experience his first storm TOGETHER!

It was Friday night, about 10:30pm. All week long the weather was ridiculously hot – Africa hot – Tarzan would have had difficulty…. I mean it was HOT!

Just the day before, Harley and I came outside to get the mail and on our way back to the house we went through the backyard and up the deck steps. When he reached the sliding glass door, he began to hop from paw to paw. The only thing missing was a cane, a tuxedo, and a top hat – he looked like a tap dancer. I immediately opened the door for him, but before I followed, I took my flip flops off to gain personal knowledge of the same sensation – it was not pleasant – so we limited our comings and goings the rest of the day.

BACK TO FRIDAY…Naturally at 10:30pm, I figure it’s now “okay” to let them run around outside, or even go for a walk with me if only up the street. But when I opened the door, what I noticed seemed rather “strange.”

The wind was blowing awfully hard, and the tree branches and bushes were moving way to much. We all sort of stared outside for a second or two, and then realized one heck of a storm was on it’s way – so the family jumped into action. Our goal was to gather the cushions from the patio, secure the furniture in a corner to prevent it from flying around, and get back into the house before the clouds opened up.

I asked Tiffany to stay with “the boys” while her friend John, my husband Lee and I passed her the cushions. Even with the gusty winds, it was still over 80 degrees – just CRAZY…

Leo came out into the backyard with me, and to my amazement, he LOVED it. He ran through the yard, let the wind blow him from one side to the other, and rolled around with absolutely no concern what-so-ever. I was so “blown – away” (pun intended) when he brought me the ball, I put the cushion down and threw it to him (the wind took it in a whole different direction, but he enjoyed the game just the same).

With all the cushions put away, and the chairs and tables secured, we managed to get inside right before the deluge began, along with the magnificent lightening, rolling thunder and the downpour of rain smacking the windows.

Once indoors, I looked for Leo, and panicked when he wasn’t by my side. I immediately imagined this 94 pound beast stuck mid-stomach as he attempted to crawl under my bed for solace. I scolded myself for not keeping a better eye on him and I cursed myself in advance if he was off in a corner somewhere trembling and peeing on the floor.

I flew to the stairs prepared to climb them two at a time in search of my gentle giant to assure him everything would be okay, to find this: 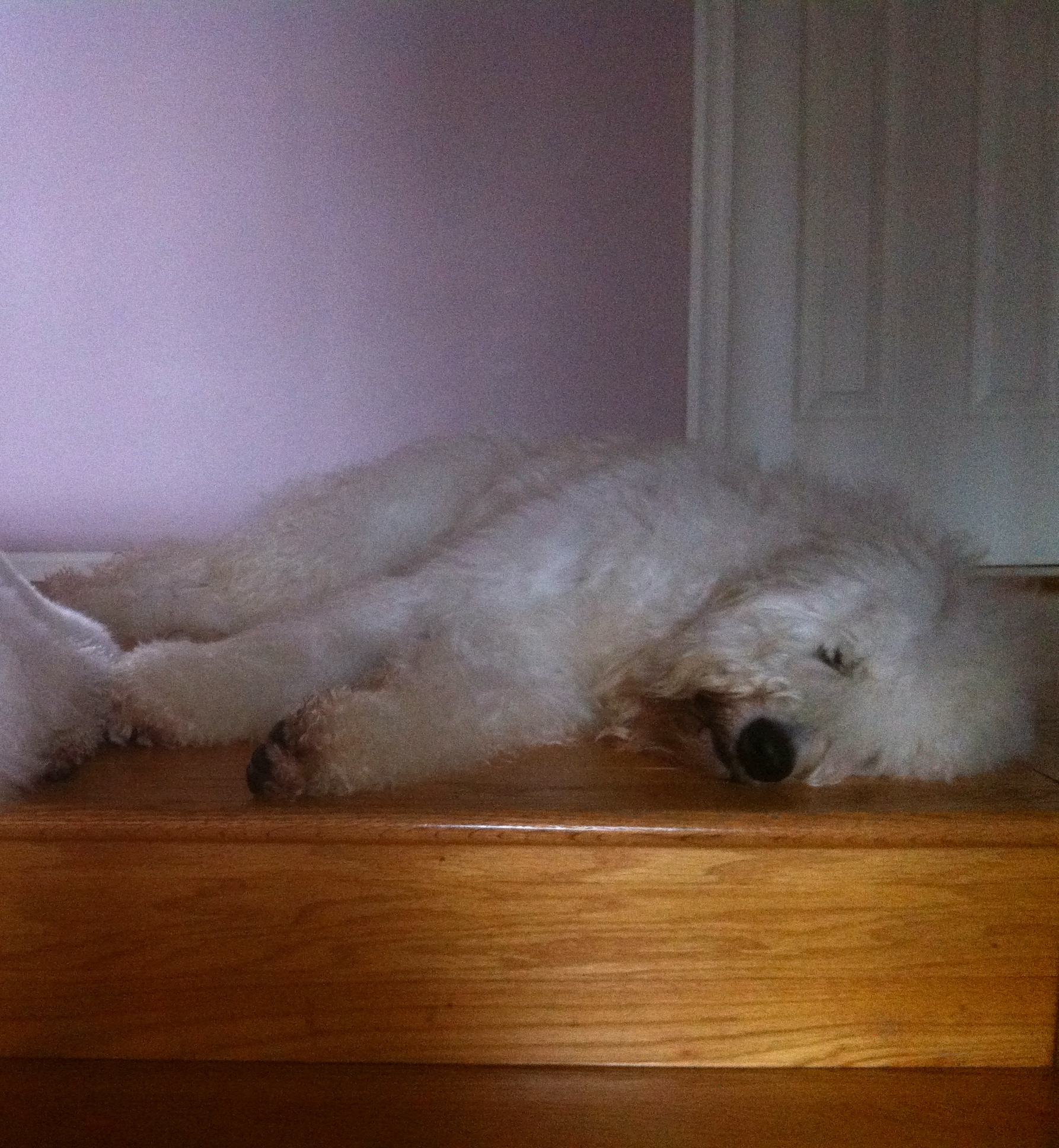 All that ripping and running tired my BBD (big baby doodle) out and he went to his favorite place (the top of the landing) to take a nap!

The storm lasted about an hour, and on our Saturday morning walk –  just a block from our home, two of our neighbors woke to a most unpleasant surprise on their lawns: 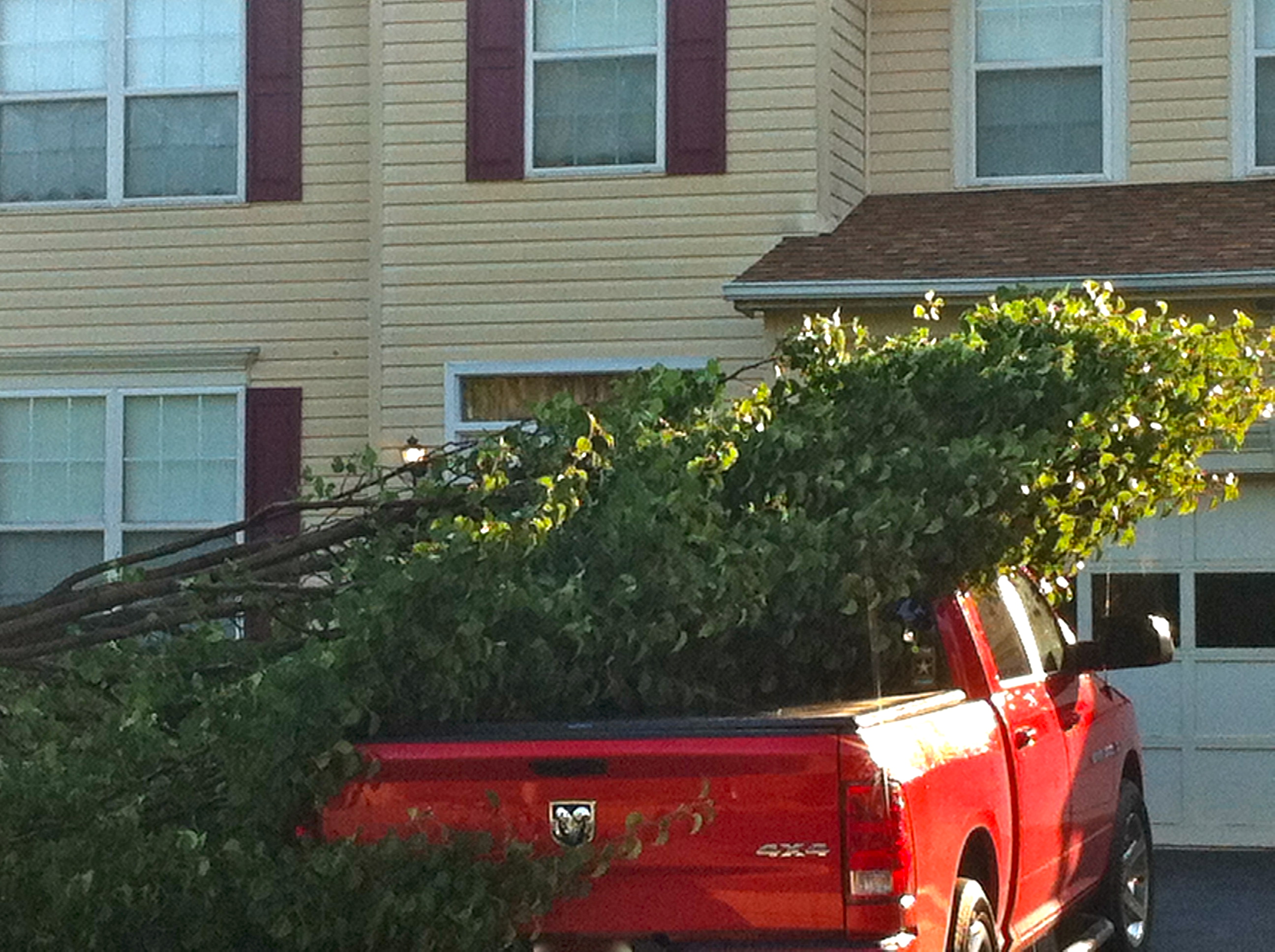 this was a huge tree 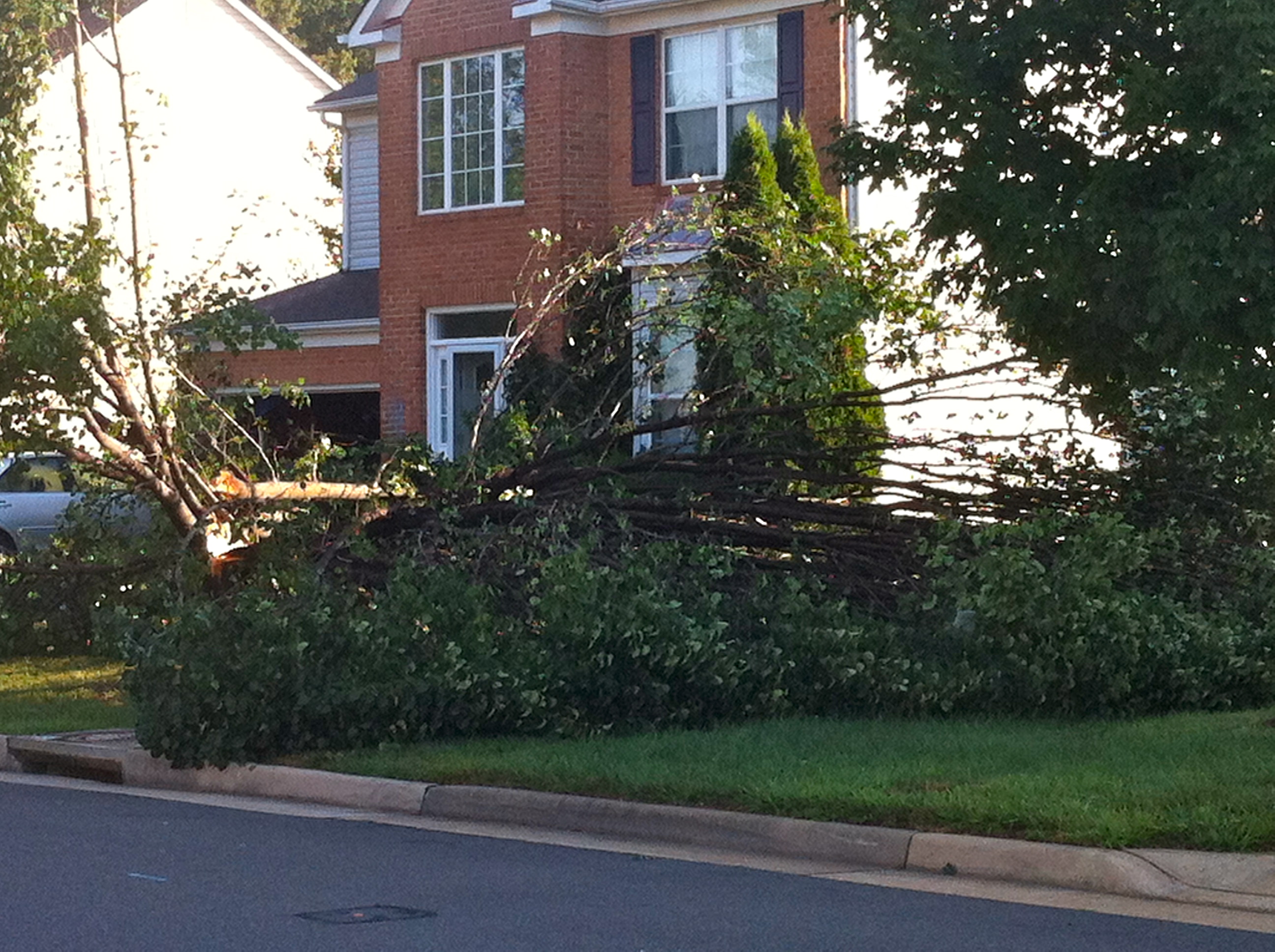 Check out the trunk size… 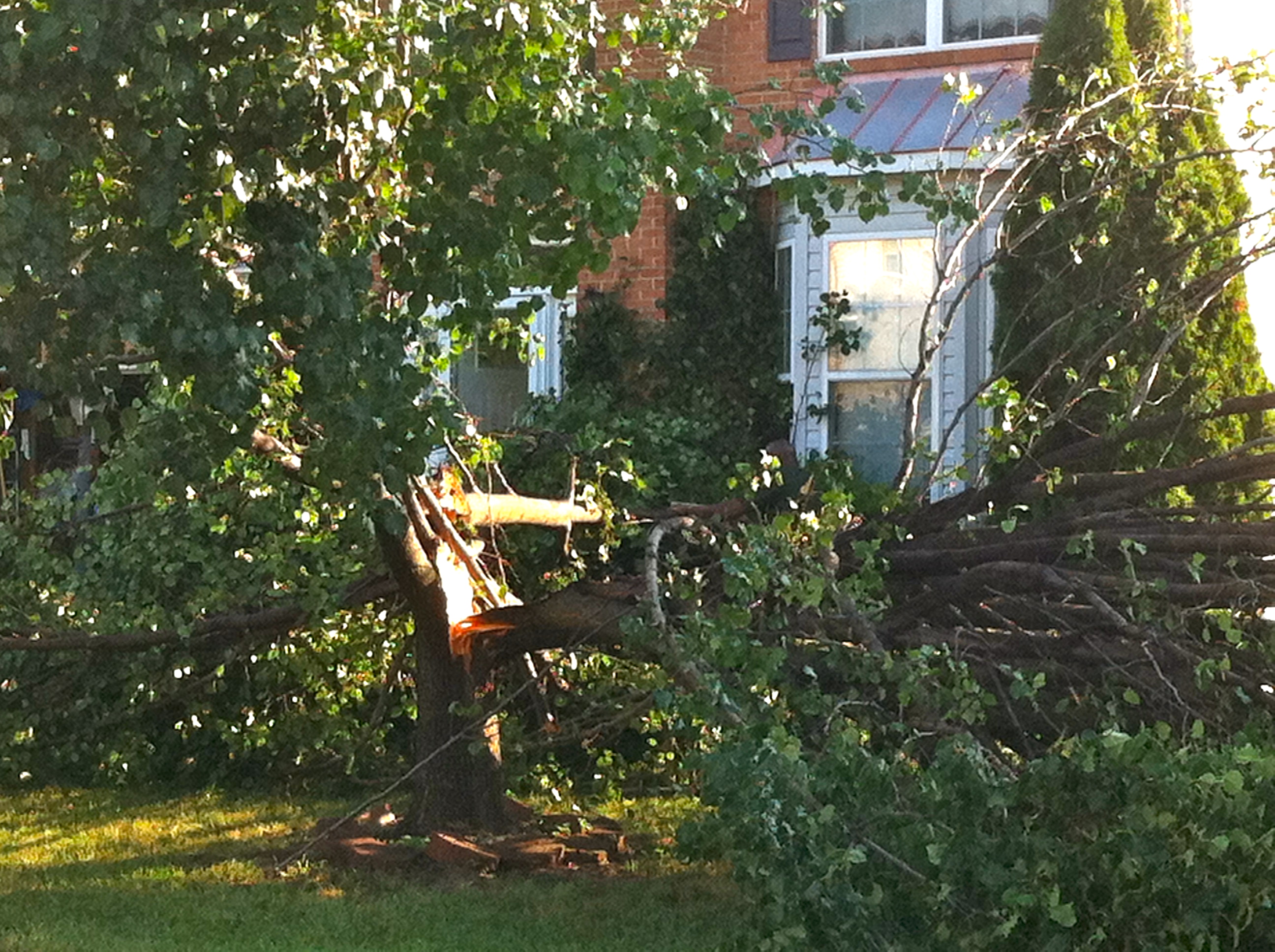 When we returned, I looked at the newspaper online and this is what I read:

“Between 9:30 and 11 p.m. Friday night, one of the most destructive complexes of thunderstorms in memory swept through the entire D.C. area. Packing wind gusts of 60-80 mph, the storm produced extensive damage, downing hundreds of trees, and leaving more than 1 million area-residents without power.”

Other communities were severely affected with loss of electricity and extensive property damage to include our son with loss of power for over 24 hours as temperatures soared AGAIN to the hight 90’s.

Lee managed to do a little clean up himself: 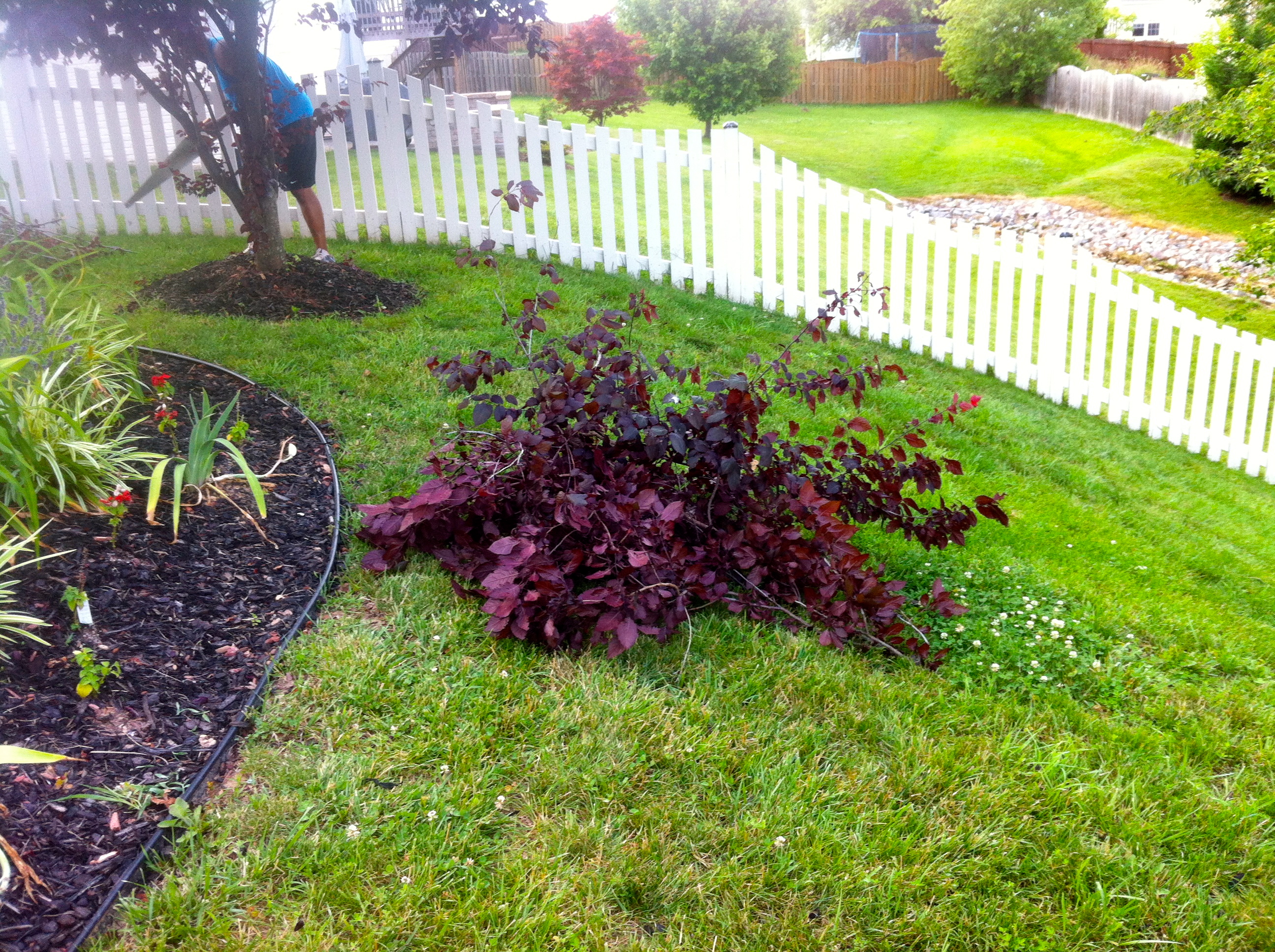 And Harley helped (please see video below) by making his own pile!
HARLEY AND THE TREE LIMB

I later came across an article from the Human Society  – FEAR OF THUNDER AND OTHER LOUD NOISES – which I found quite interesting. With the “celebrations” associated with the 4th of July almost here, I am praying for the same “positive” outcome with Leo as with the storm. But because it’s not a plastic grocery bag…

Something tells me we’re gonna be just fine…

As always – thanks a “doodle-bunch” for reading, have a Happy 4th of July and be safe!