I’m always entertained when I take Harley out for a walk. He takes his walks very seriously – and he takes his time during these walks. He is not the dog you want to walk when you’re in a hurry to go somewhere. Every tree, every mailbox, every light post gets “thoroughly” examined. This is his job, and he rarely gets distracted  – until the day he played leapfrog while on a walk in Charleston… 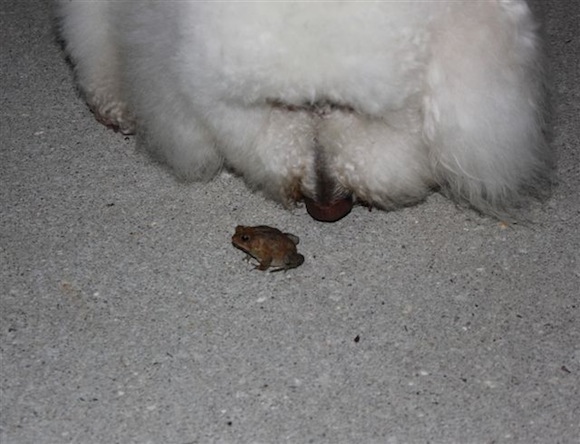 Frogs on the sidewalk are somewhat rare in our Virginia neighborhood, but in Charleston after a hard rain you can spot them hopping around freely in the early evening. When Harley first spotted Mr. Frog he walked past it as if it was a rock (rocks are not on his sniffing list). But as soon as he stepped over it – Mr. Frog hopped.

This sudden movement caused Harley to spin around. I swear he had the most puzzled look on his face trying to figure out how the rock moved. So when Mr. Frog leaped again, right before his eyes – the leapfrog game was on!

Each time Mr. Frog leaped, Harley hopped behind it.

It was an extra long walk back to the house!