It rained all day long…. I made jokes at work about Noah’s Ark, I even asked if anyone knew where I could buy a ticket to board the vessel!

I left at my usual time (5:30pm) en route to the boys, and three miles from the Olde Towne Pet Resort, I saw flashing lights and traffic stopped. I sat there thinking perhaps it was an accident, but soon discovered the road was closed due to flooding. Like everyone else I turned around and to my surprise in that short period of time due to the rising water, I was trapped. I couldn’t continue. After sitting in the middle of the street with all the other vehicles, I called the Pet Resort (7:00pm) to tell them I couldn’t get there before they closed and they offered to board them for the night – apparently there were many owners in the same predicament.

I was able to maneuver a few feet to the Rescue Station parking lot and I sat and watched the clock tick past 8:00pm. I was tired, I was hungry (I’d eaten three of my four mints from my purse), and honestly I was really worried about three things:

I was sure he was concerned. You see, Harley is the sensitive one, if you ever spent just a few minutes with him you would agree with my daughter’s assessment: “HARLEY WAS THE MAN STANDING IN THE WRONG LINE IN HEAVEN” translation: Harley was reincarnated as a dog, but failed to get his “human memory loss” shot. So he’s here “trapped in a dogs body….”

He comprehends tone gestures, voice pitches, and sounds. He will look at you with expressions to match your conversation. He really is like an old friend, one that you always want around.

Now you might call me crazy, but I carry on conversations with the boys – especially Harley, I always have. It’s an outlet for me that provides a compassionate audience. Although his response is non-linguistic, he does communicate with me and is an active part of the conversation. When I’m sad or upset, he snuggles and is very loving. When I share good news with him, he responds by jumping around or by bringing me one of his tug toys. To me, this illustrates a certain degree of intelligence and emotion, as well as the ability to understand and interact with us.

A few days ago, my husband spiked a horrific fever and once again, Harley demonstrated his “special gift”, as he refused to leave my husbands side. I had to pry him from the foot of the bed to even eat! It’s the strangest thing… I promise you he pays attention AND understands.

While stranded in my vehicle I had to tell myself more than once to “get it together” and come up with a plan to get home ( I was tired of playing solitaire on my cell phone). Rescued by my son who lives a few blocks from my location, on his way home he called and found me around 9:30pm. By 11:00pm through back streets and neighborhoods we reached his house – a mere 6 blocks away!

The next day, after work, I rushed to the boys, the reunion in the lobby of the Pet Resort was truly a spectacle. You would have thought we’d been separated for weeks. By the time we got home, Leo was fine, but I could not walk two feet without tripping over Harley. He was restless and anxious.

A couple of days later we noticed him gnawing at his tail, it was beet red, and looked tender to the touch. I called his Vet and took him in. Turns out he had a “hot spot”. The Vet explained this comes from nervous energy usually brought on by a stressful experience, or some sort of anxiety. I then told her about my adventure… Turns out the Vet said it is very common for a pet to sense – almost physic like – similar emotions of its owner. Our routine was changed without the usual rituals, and Harley undoubtably sensed something wasn’t right.

If you’ve ever loved a dog, you are smiling and shaking your head in agreement as you read this blog. And if you’ve ever known anyone whose loved a dog, and was truly attached, you have to be honest and admit to yourself that you remember moments when you witnessed something remarkable take place between them and their dog. The bond, love, loyalty and friendship given to us from a dog is irreplaceable…

One of the leading orators and debaters of his time – U.S. Senator George Graham Vest gave a delightful speech from an earlier period in his life when he practiced law in a small Missouri town. It was given in court while representing a man who sued another for the killing of his dog. During the trial, Vest ignored the testimony, and when his turn came to present a summation to the jury, he made the following speech and won the case.

Gentlemen of the Jury: The best friend a man has in the world may turn against him and become his enemy. His son or daughter that he has reared with loving care may prove ungrateful. Those who are nearest and dearest to us, those whom we trust with our happiness and our good name may become traitors to their faith. The money that a man has, he may lose. It flies away from him, perhaps when he needs it most. A man’s reputation may be sacrificed in a moment of ill-considered action. The people who are prone to fall on their knees to do us honor when success is with us, may be the first to throw the stone of malice when failure settles its cloud upon our heads.
The one absolutely unselfish friend that man can have in this selfish world, the one that never deserts him, the one that never proves ungrateful or treacherous is his dog. A man’s dog stands by him in prosperity and in poverty, in health and in sickness. He will sleep on the cold ground, where the wintry winds blow and the snow drives fiercely, if only he may be near his master’s side. He will kiss the hand that has no food to offer. He will lick the wounds and sores that come in encounters with the roughness of the world. He guards the sleep of his pauper master as if he were a prince. When all other friends desert, he remains. When riches take wings, and reputation falls to pieces, he is as constant in his love as the sun in its journey through the heavens. If fortune drives the master forth, an outcast in the world, friendless and homeless, the faithful dog asks no higher privilege than that of accompanying him, to guard him against danger, to fight against his enemies. And when the last scene of all comes, and death takes his master in its embrace and his body is laid away in the cold ground, no matter if all other friends pursue their way, there by the graveside will the noble dog be found, his head between his paws, his eyes sad, but open in alert watchfulness, faithful and true even in death.
George Graham Vest – c. 1855 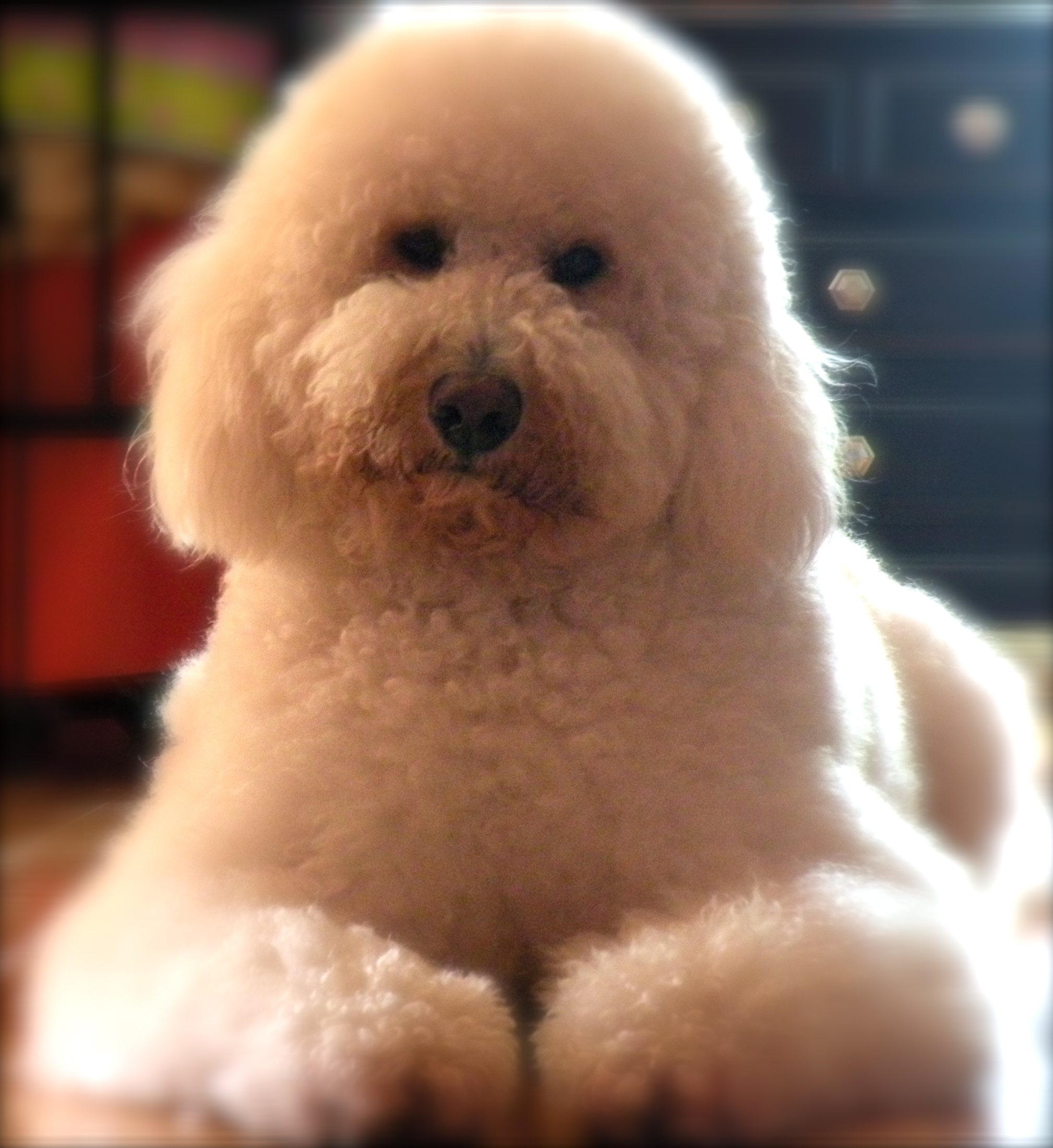 I may never know the man trapped inside, but I adore the spirit and the body he occupies.