“He’s gonna throw up!” I yelled three times as I gripped the steering wheel. We had a car sick pup on our hands… 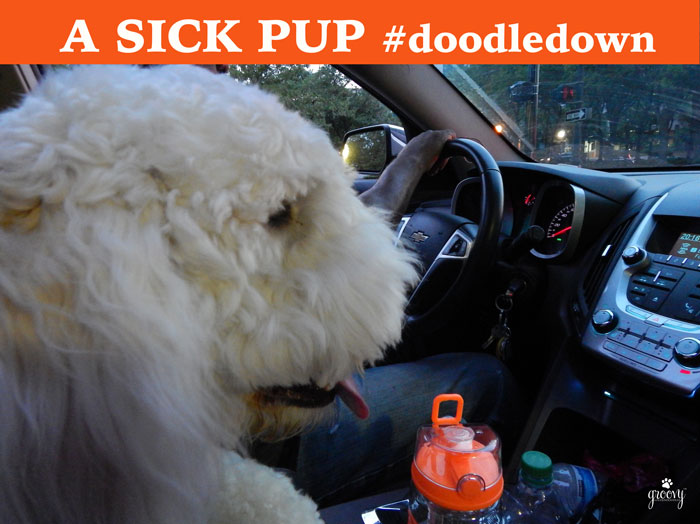 There we were – cruising down Interstate 95, 4 hours into our 7.5 hour road trip when Jaxson started dry heaving heavily between us.

I tried to remain calm, all the while cursing myself for not bringing a towel on this trip. #Ialwayshaveatowel

There is no exit in sight, and traffic is so thick with tracker trailer trucks I dare not pull over on the shoulder and let a dog out.

Thank the Doodle, two miles later I saw an exit.

Coming out of the turn, I took the first parking lot I saw – Bojangles.

I put the car in park, snatched a leash as I leaped out, lassoed Jaxson like a prize steer in a rodeo competition, and got him to pavement with no time to spare.

Who said Mother’s can do it all? #paythatperson

He threw up twice, not really sure why. Breakfast was hours ago, no treats in the car, just one of those things I reckon.

He and Harley tinkled and I gave them some water.

I exhaled and Lee relaxed as Jaxson and Harley stood around taking in the smells coming from the chicken kitchen.

I went inside to use the restroom, stopped and grabbed a two piece and came back outside to find a whole different scene.

Lee had this pensive look on his face. #notgood

At first I thought it was from the sun, but then as I got closer – I noticed Jaxson was barking RALPH again!

Lee motioned his head towards the car – and the sight was awful.

To save you from too much graphic detail, suffice to say, the waterproof car cover saved the seat, but the side door panel and the floor mat weren’t that lucky.

It took a few seconds but I gathered my composure and cleaned up as much as I could with a few napkins.

We noticed a gas station mini-mart across the street.

Lee went in and purchased –

We took our time, did what we had to do and started our journey once again.

We were way behind schedule – but what the doodle!

Lee drove the rest of the way.

Harley sat in the front seat… 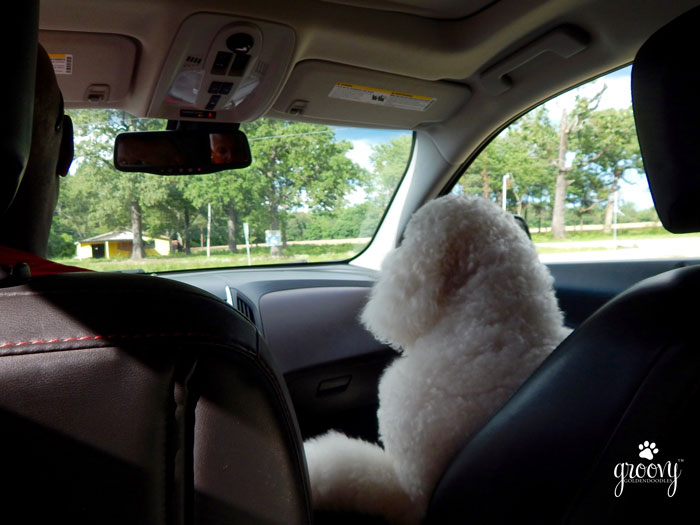 Leaving me stuck in the back seat riding next to #projectilevomitJax, fighting with the plastic drop cloth as it stuck to the bottom of my feet… 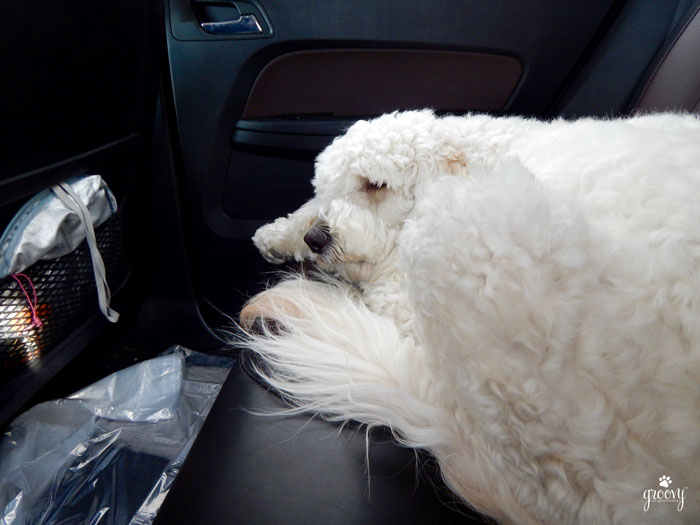 A sense of humor is a necessity when you have dogs!

PS: Jaxson is fine – we arrived safely – tomorrow the car gets detailed.

PSS: If you’re planning a road-trip this summer, I’d highly recommend adding the drop cloth to your list of things to bring 🙂