As the boys get older, they have become more rambunctious, incorrigible (at times), clever, and if you can believe it – even more entertaining. While they aren’t always your perfect canines, it is close to impossible to get angry with them. They are both such intelligent creatures, I marvel at their deductive reasoning capabilities.

Countless “Doodle” books occupy space in our home, and every single one of them carry the same sentence (more or less): “Do not strike out and hit your doodle!” Not sure if this is true of all dogs, but you will find it referenced often in doodle literature. Seems the poodle and retriever are sensitive breeds, and will shut down completely from learning pretty much anything if physical discipline is enforced.

In the past, we’ve had a few pups (for a hot second) and if I’m being totally honest, I too fell victim to the rolled up newspaper concept when something went wrong, but hindsight is a frightening human DVR. Let’s think about it: you want your dog to either do something (or stop doing something), and he doesn’t follow your command, so you whack him with the newspaper but then can’t fathom why he still won’t obey – hmmm… It wasn’t until I started reading and really paid attention to Harley, that I noticed the more he trusted and loved me, the harder he tried to please me. And to please me was to listen to me.  And as crazy as it sounds, talking to Harley, using various tones, seems to do the trick.

It’s been almost 3 years and I’ve never had to whack, pop, grab, drag, isolate, or punish Harley. NO! He is not the “wonder dog”. YES! he will try my patience. With children people affectionately call this the “terrible two’s”, in my house, I would like to introduce the “naughty three’s.”

When Harley was younger, our daughter would come home with smart toys. These are the toys designed to make your dog think and reason.  Your dog has to work to unveil the treat, and there is some sort of puzzle that he must solve should he want to eat. My husband deems this tormented pleasure! Harley, on the other hand loves it! He stays with it for hours, and becomes proficient in his speed with more and more practice. These toys and its training strategy have come back to haunt me!

Like a chess player, Harley can calculate an alternate move if he so desires to win, even if I’ve said “no”! So just like the parenting tool where you count to 3, when all other techniques have failed – I go for… THE CAN! The “can” (from any type beverage) has pennies in it, and he cannot stand the sound. I first used it when he was much younger, he found that he could rest under a chaise lounge, which was cool, but while there he would chew the carpet.

Everything I did to correct this behavior failed. I finally got to the equivalent of a number three but he just looked up at me, (with what looked like a sly grin) and proceeded to chew again. I actually had to “shoo” him away, and I knew then I needed to up the ante a bit. So the next time he shimmied under the chair for a meal of carpet fibers, BAM! – the can was sitting there on top of his favorite spot. Mr. Smarty Pants used his nose to move the can out of the way, BAM! -it fell over, pennies rolled around inside making a startling noise, and Harley was gone! As he flew, I used the command “shame on you”, which he associates with “Mommy’s not pleased”, and we never had a carpet problem again.

The can doesn’t come out much at all, in fact Leo hasn’t even met the can. Just mentioning it to Harley is enough. So on those rare occasions when I feel like I’m at number three, I just say, “alright now, I’m gonna get the can”, and talk about corrective behavior! It’s magic.

Side note: I laughed out loud one day when I saw “the can” advertised online for sale…..

The baby gates are now gone (I’m comfortable Leo is completely house trained – knock on wood!), and Harley thinks he can go back to his usual spot – my living room couch! With two dogs, I do not want to condone this behavior, AND I would like to get new living room furniture one day soon. So after chasing Harley off the couch a couple of times, with Leo in tow I might add, I decided to go for the big guns – yep, you guessed it – I went for the “can”. I placed the can on the couch in the exact spot he favors, and left for a “mini vaca”. Once you look at the picture below, you will understand the title of this blog….. HELP!!!!!!

PS: I appreciate so much those that are following the “Chronicles and Adventures of Harley and Leo”. It is YOU that have inspired me to write, and we are so grateful, however, please take a few seconds and subscribe to their blog (top right hand corner) so you can receive email notifications when a new blog is posted (then accept the test email from wordpress.com). It is FREE, and your email address is SAFE, and the success of the boys blog depends on it. 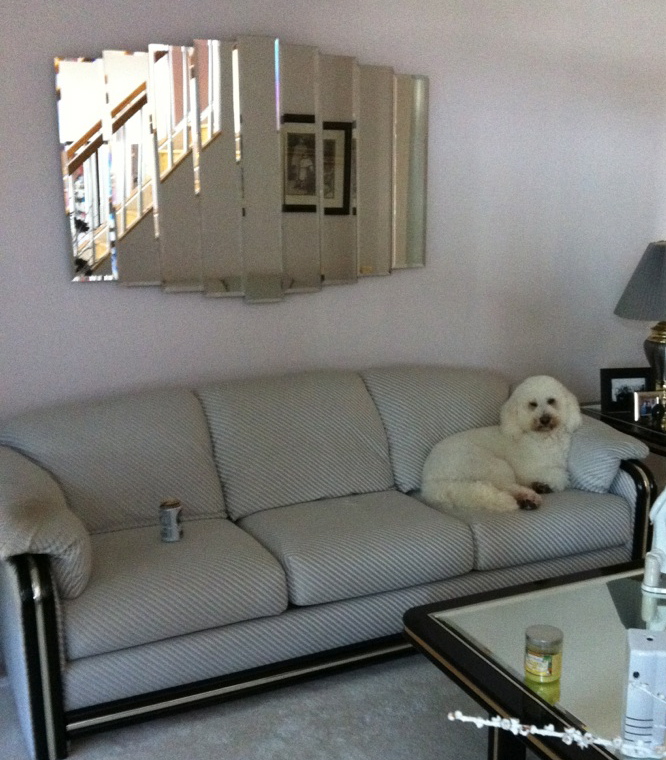 Why didn’t the can move?