I have bed bugs! Not the tiny microscopic kind with a gazillion little legs. I’m talking about the hairy four legged kind with the extra long bushy tail that swishes past my face at night.

We are losing the bed battle! 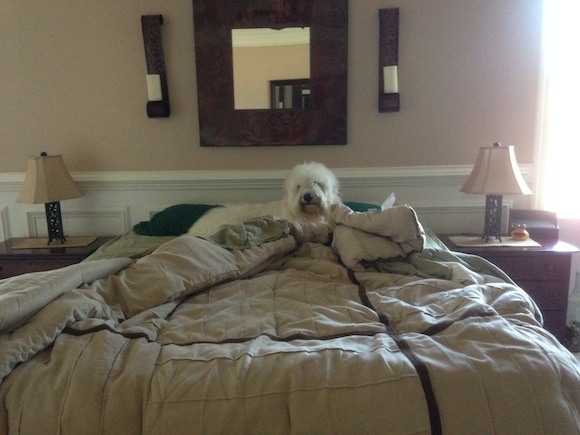 I went to use the restroom, and while I wad gone he made himself comfortable

When the “slumber pawties” first started, we thought it was because we kept buying the wrong beds and perhaps they weren’t comfortable.  I say that because they were rarely used.

I remember when we brought home what looked like a love seat with a wrap around armrest for Leo. He was a puppy, and we thought he would snuggle up in it just like the dog in the picture on the sales tag, but he only slept “near it”… 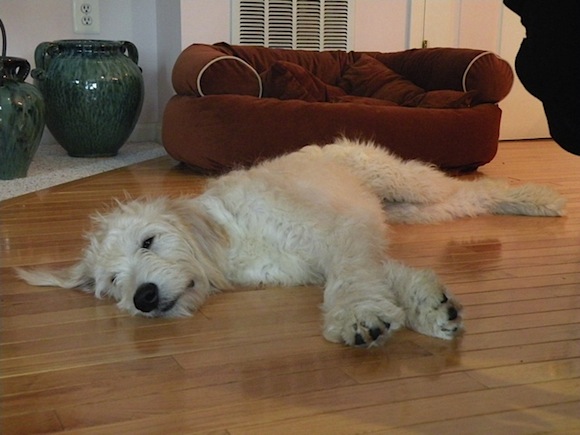 So close – but no winner

For light naps, Harley chose to “touch” his bed for some unimaginable sense of security like Linus and his blanket. But he rarely got in it… 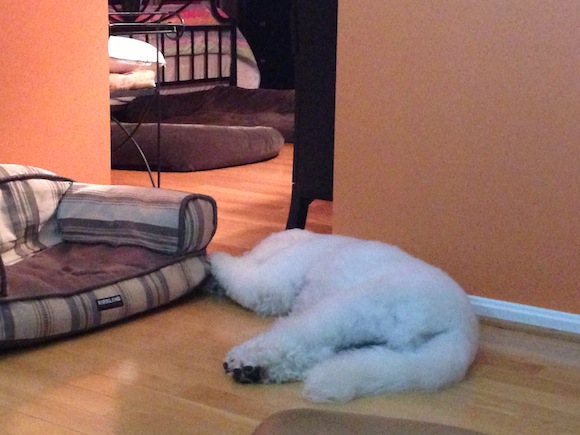 I have no explanation – NONE! 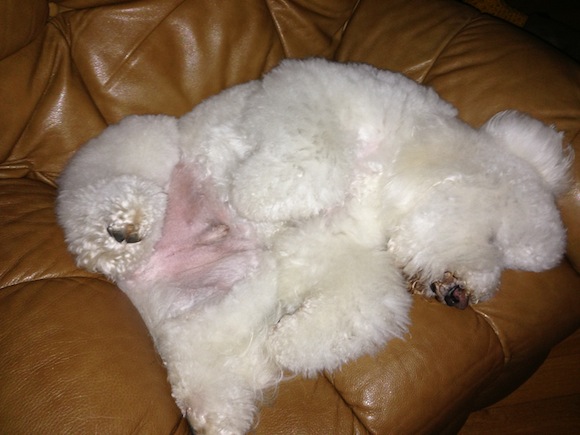 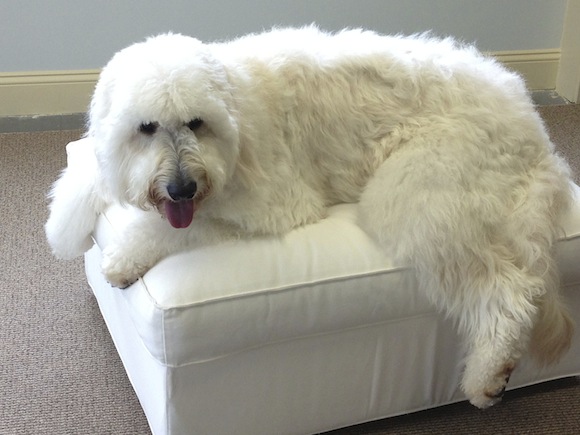 Two more of those and you might be ok

Slowly our beds became “the place” to nap, snore (yes they snore) drool, and stretch out on… 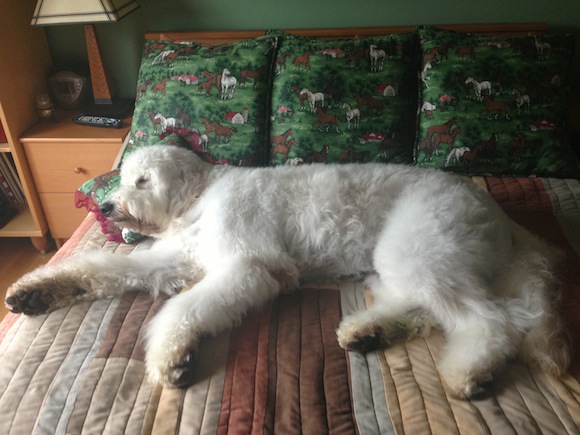 No I did NOT place that pillow under his head

DH would send them away, but like true “bed bugs” they would return later… 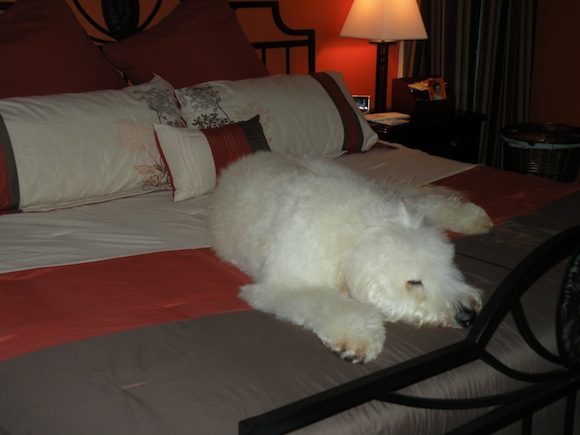 There are far too many articles to site all the “pros and cons” of whether or not one should allow ones dog to sleep in bed with them. According to one article from Pawnation: A 2007 survey showed more than 2,500 pet owners by the American Pet Products Association found 43 percent of dogs slept in a person’s bed at night, a steady increase from 34 percent a decade ago.

I really believe it just boils down to personal choice.

While some would say:

Others may argue that:

There are times when all four of us are jockeying for space in our bed. Harley’s in the middle, Leo’s at the foot, with DH and I hugging our respected edges for dear life most of the night. I rise in the morning, irritated most of the day from sheer exhaustion and lack of sleep.

But it never fails – when I’m ready for slumber, I see them watching me as I start to remove the decorative throw pillows from the bed. They run, jump and dive in to reserve their spot – I laugh, and they look like they have the nerve to smile. I yell to DH: “Hey babe, here we go again” as I remember the popular nursery rhyme:

Good night, sleep tight,
Don’t let the bedbugs bite,
Wake up bright
In the morning light
To do what’s right
With all your might. 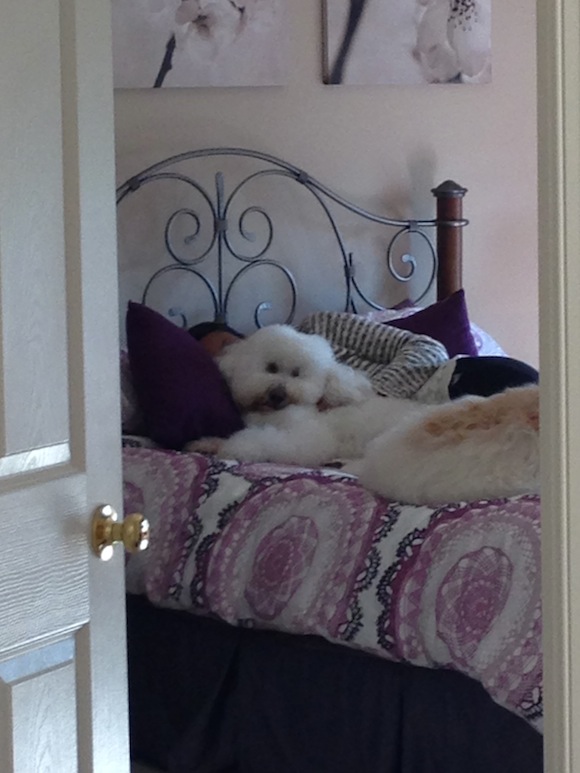 Thanks for reading,I  pawmise to keep on writing.

Would you like to DOODLE-tize your Holiday this year? Order your cards online today… 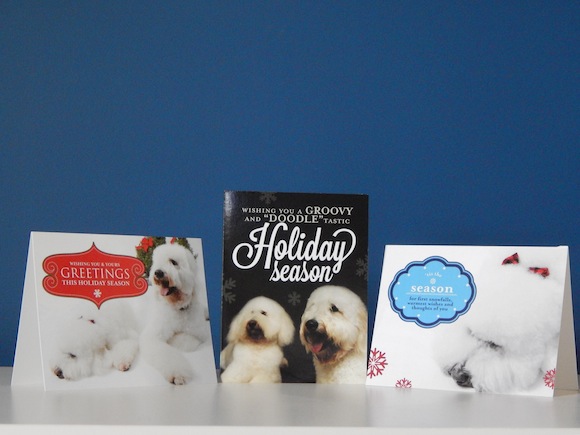