This is the story of a long and on going “chair battle” between: 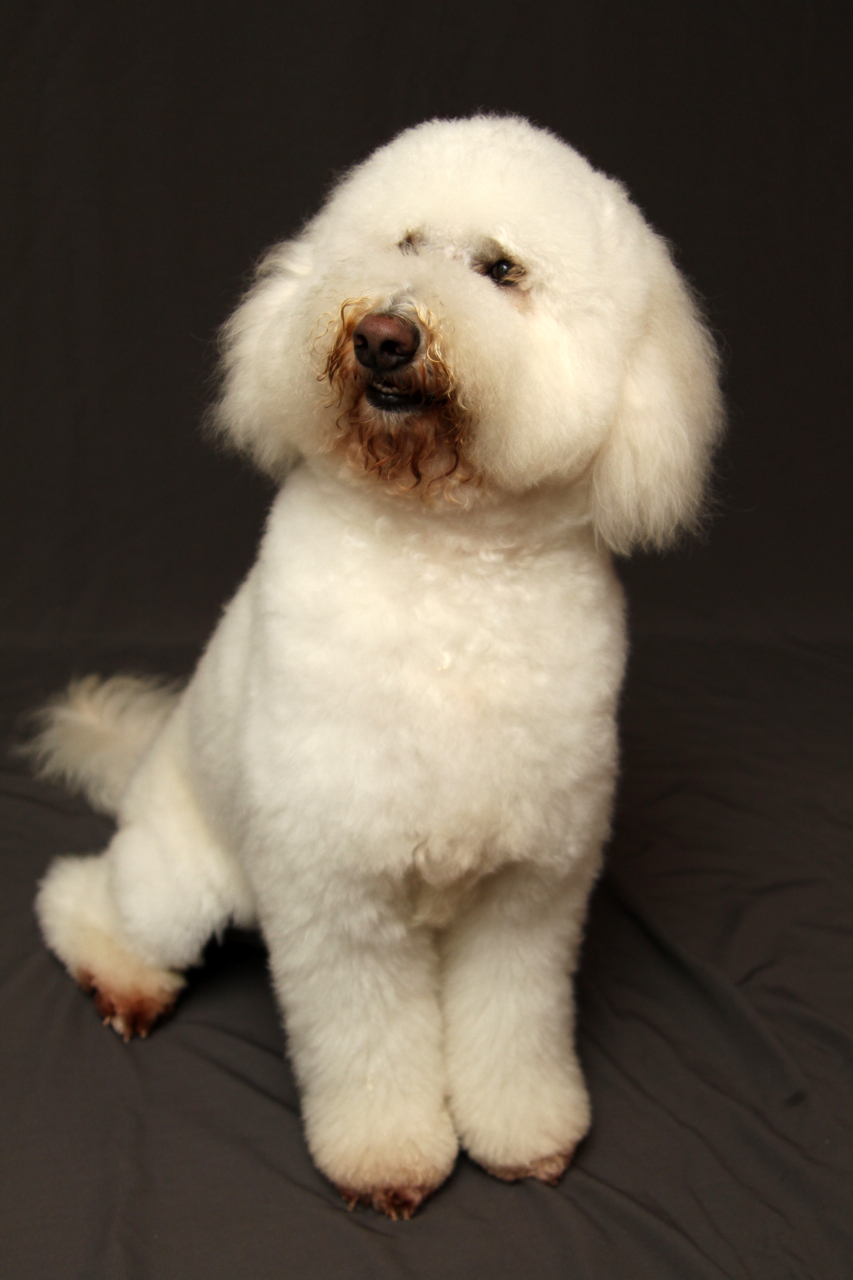 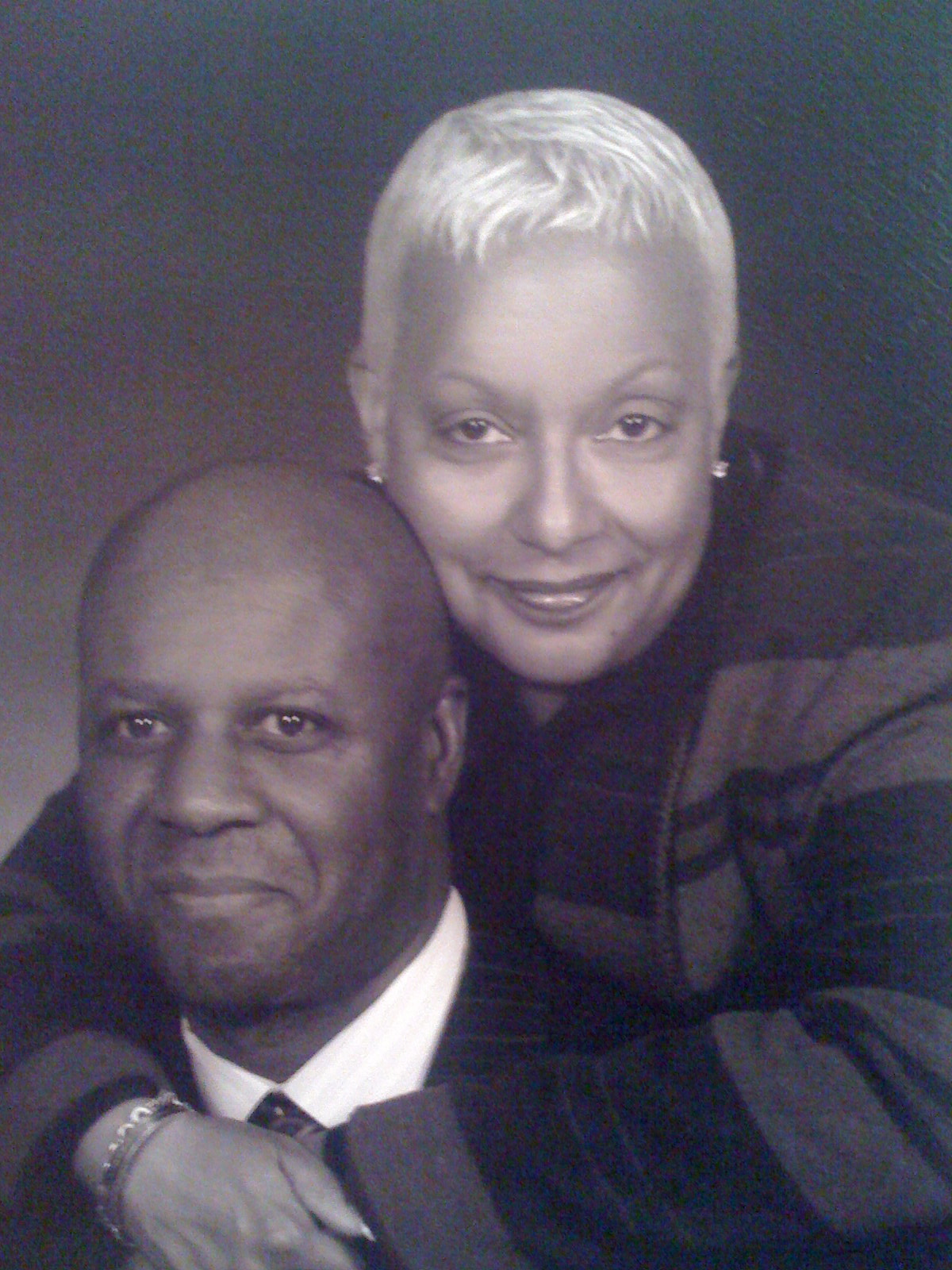 When I hear the phrase “creatures of habit”, I have a tendency to envision a “person” not a “pet”…. until Harley!

First a little family history – When I met my husband a “gazillion” years ago, we would swap stories about our childhood during what some would call the “dating period.” He talked about his one and only dog “Snap” and how he was the “best dog in the world.” According to Lee, he and Snap were BFF’s for many years. I remember asking him where Snap slept, as I imagined him curled up on the foot of Lee’s bed on top of grandma’s hand made gingham comforter…. ( you know, like Timmy and Lassie).

WELL PINCH ME WITH A FORK AND LABEL ME DONE! I was speechless when he told me Snap never came in the house! He lived his entire life in their backyard! That was not the picture I envisioned as I listened to all the “my dog Snap” stories.

This is why, before I brought Harley home, we agreed to “compromise” on a few differences:

ME: He lives in the house with us
LEE: Ok

LEE: He’s not sleeping in the bed
ME: Ok

ME: He’s sleeping in our room
LEE: Ok

LEE: I don’t want him on the furniture
ME: Alright!

With the major issues out of the way, I thought we were “straight.” But as you can see, less than 6 months later, “doodle dad” got busted in the bedroom sunroom… 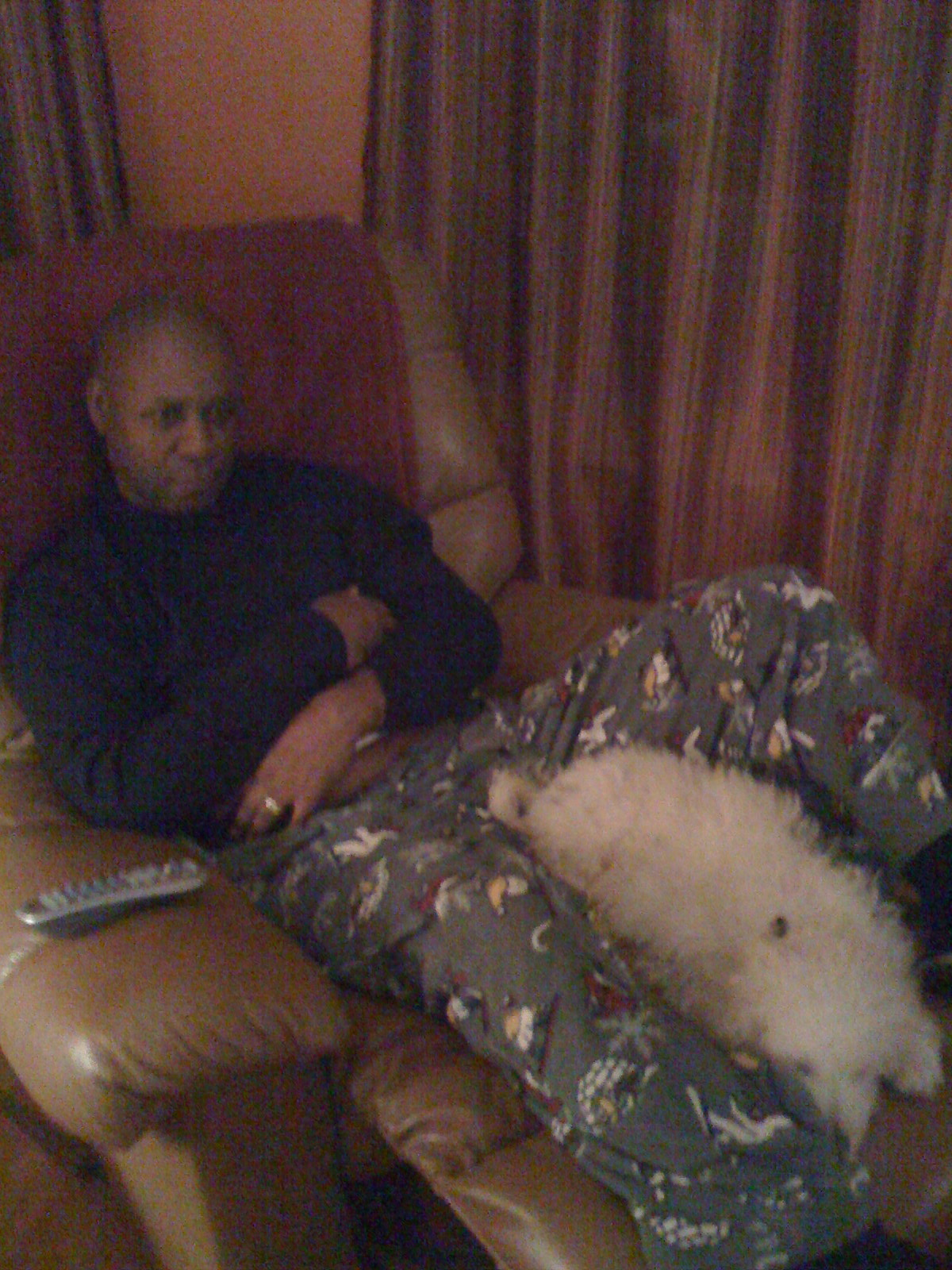 The recliner was Harley’s first real “chair moment” yet neither one of us thought it would haunt us forever….

As time went on, we would find him there occasionally… 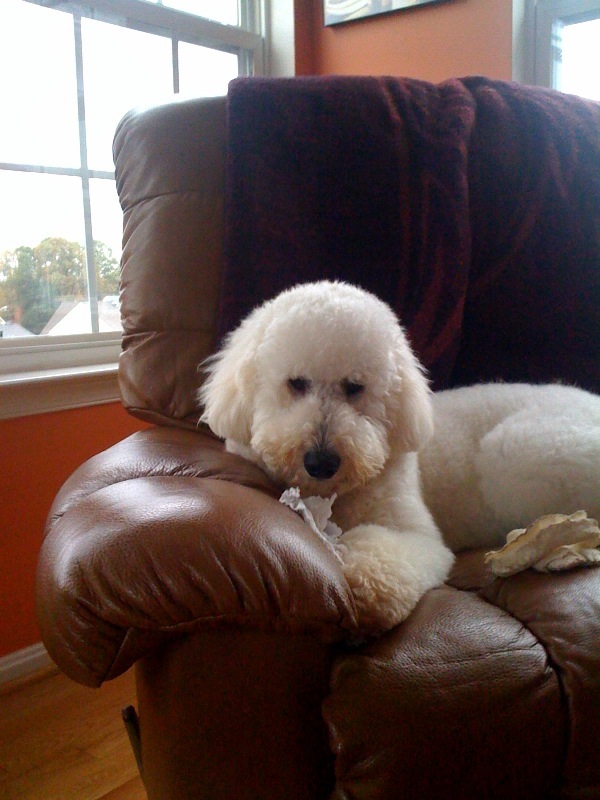 We thought it was cute – because he was so cute. Then he just took over… 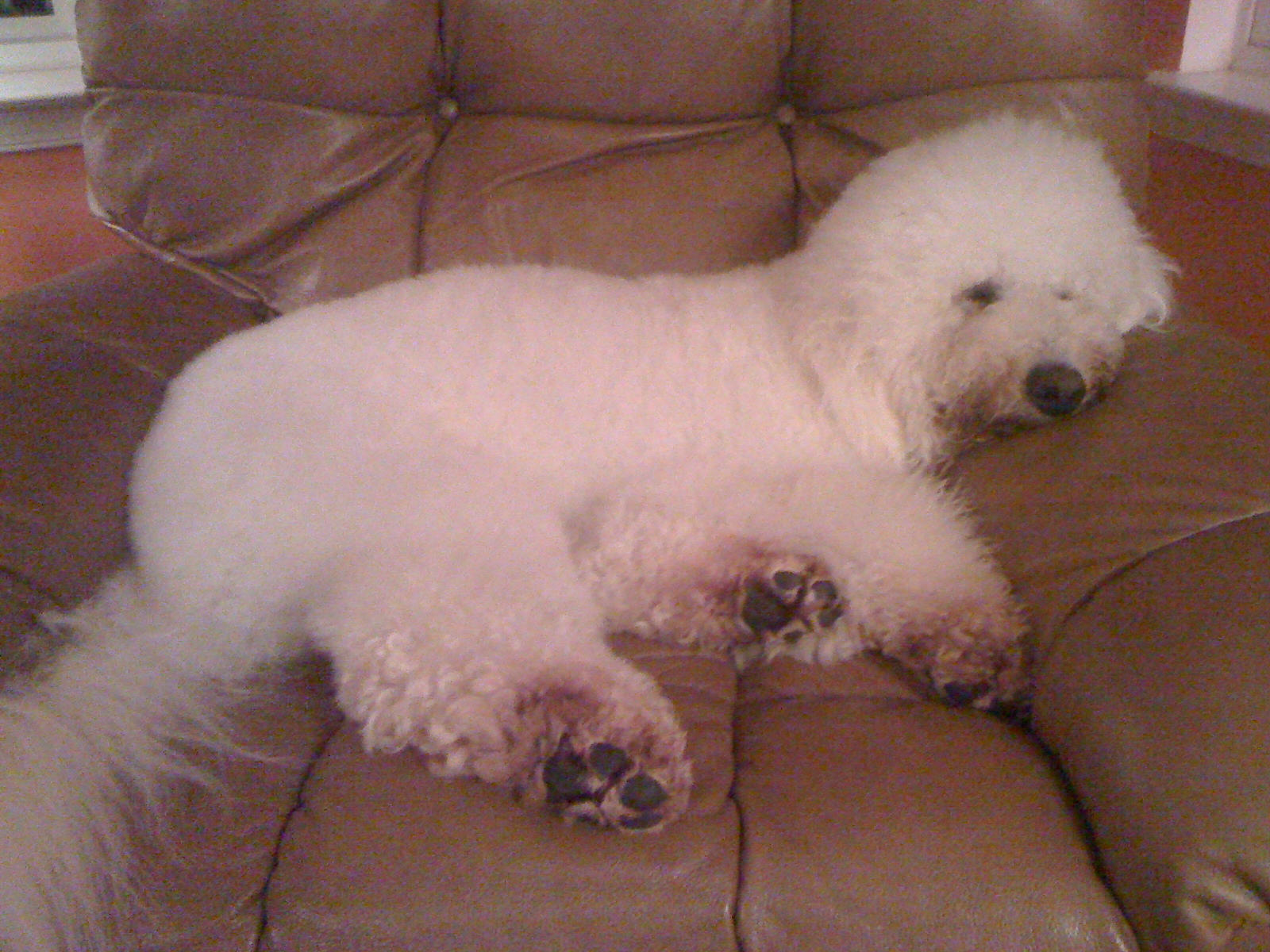 Because this is our “television – read – relax” room off from the bedroom naturally there are only two recliners in there. Less than twenty feet away, in our bedroom he has his own plush spacious over sized bed, yet “Harley-Darley” prefers one of our chairs.

Most recently, he has started a new game. When we retire for the evening and head upstairs, Harley will race the steps two at a time to beat Lee to the recliner. Lee then has to ask him, (yes, it’s comical) to move as Harley gives Lee the “I was here first” look.

I finally realized this had turned into a “chair war” a few weeks ago, when Harley tricked Lee (who was already sitting in the chair) into thinking he had to use the bathroom. He sat in front of him, clawed at his leg until Lee got up. Once they walked a few feet away from the chair, Harley doubled back, jumped in the chair – and I believe I saw the dog smile!

So last Friday I’m in COSTCO, and I saw the cutest little dog bed that looked like it would make the perfect chair for Harley… It has the arms that he likes to rest his head on just like the recliners at home. 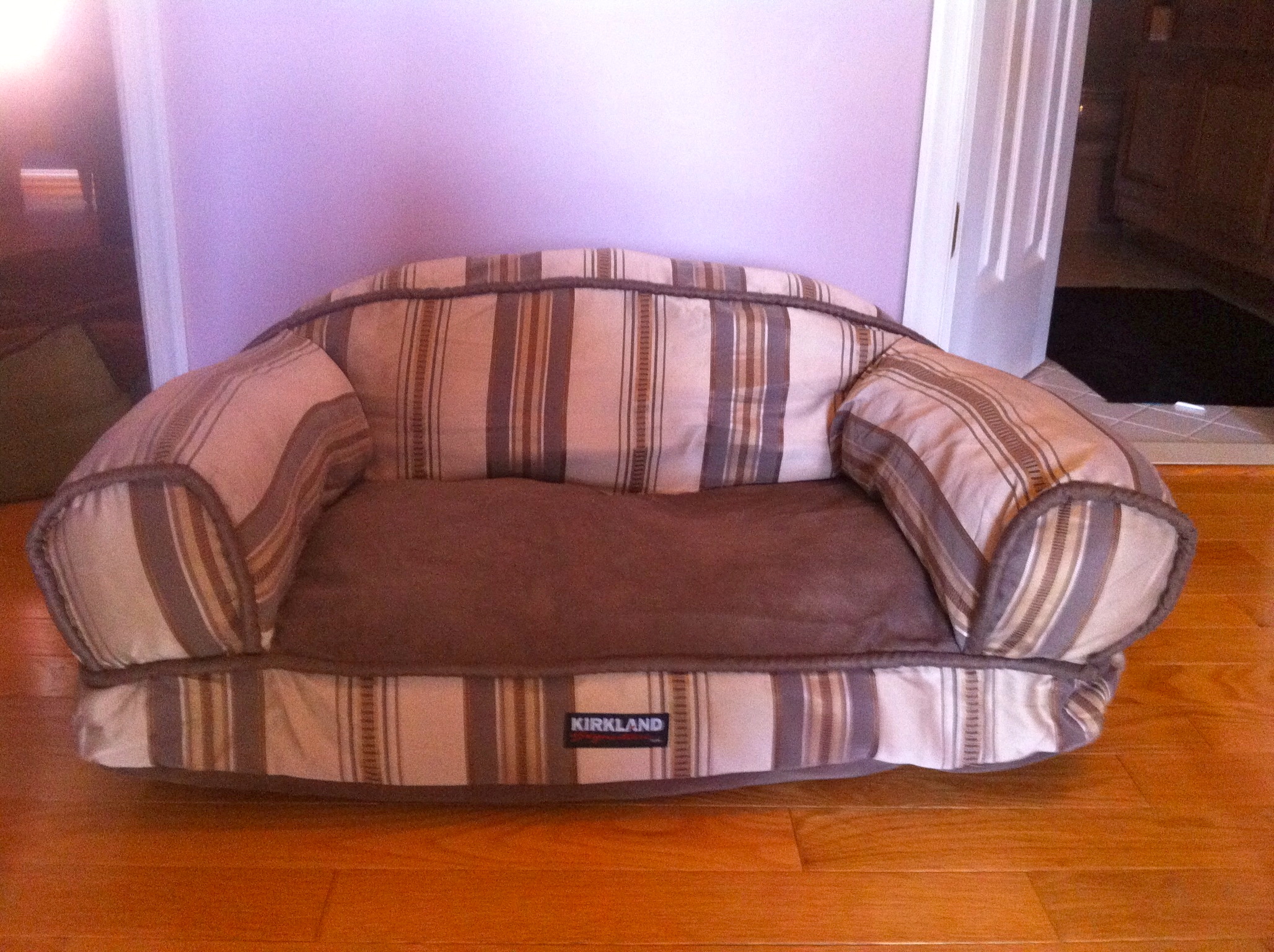 It was on sale, so I snatched it up fast. I’m sure I looked a sight caressing this thing at the checkout line! Folks had no idea I was holding the equivalent to a “winning lottery ticket” in my shopping cart.

By the time I grabbed the boys from Olde Towne Pet Resort (it was a camp day), and got home – Lee was already there. We took the chair upstairs and placed it between the two recliners. Harley – who was behind me, went right past the recliner, got in his new chair, and has loved it ever since! If you look closely you will see the tag sticking out from under his leg – never had time to remove it. 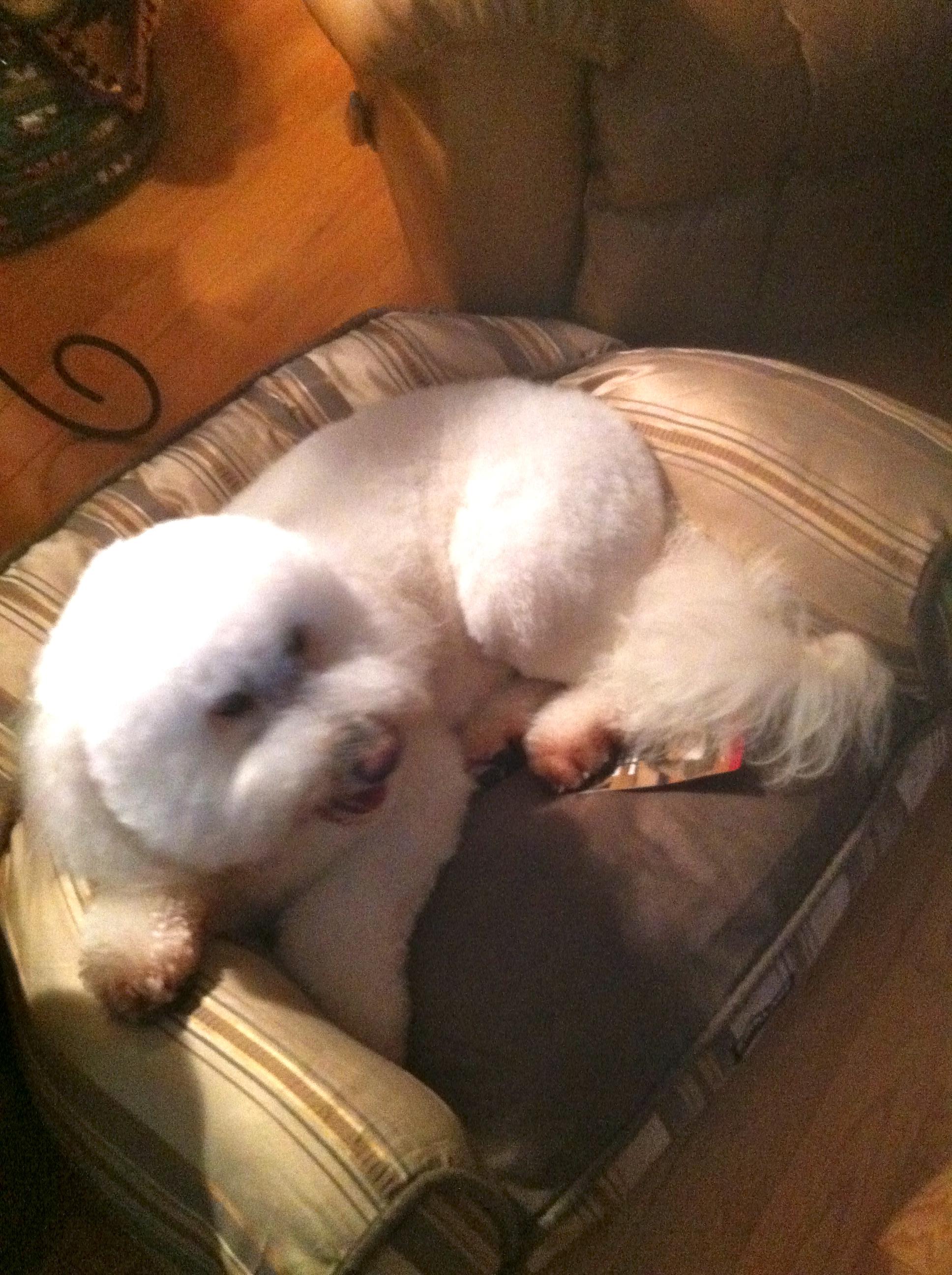