Meet Henry. An Army Non-Commissioned Officer assigned to an EOD (Explosive Ordinance Disposal) Unit, and his (then) 6 or 8 week old partner in crime “Max” or as Henry insists I use his full name: Maximus! A Brindle Pit/Lab rescue mix… 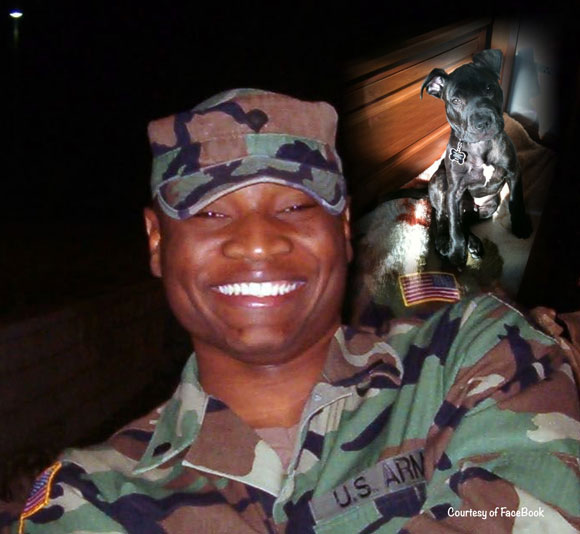 I remember taking The Boys for a walk when Henry first introduced me to Maximus. Several times in the two years they were together Henry deployed to places we didn’t talk much about.

He would always walk down to our end of the street to tell us when he was leaving. And as he shared what little he could (departure dates, securing the house, the mail, lawn service, etc…) I always made it a point to ask about Maximus. “He’s with friends that really love him” would be his reply.

Henry and my husband would speak “Army” for a while, then there was the manly handshake and words like “take care of yourself” right before my maternal hug along with a silent pray that he would come back safe and unharmed.

And “thank you God”, for he always returned – safe and unharmed.

In April of last year, Henry made that walk down to our end of the street once again, to tell us he was going back to Afghanistan. His lanky four legged buddy already residing, once again, with his surrogate family… 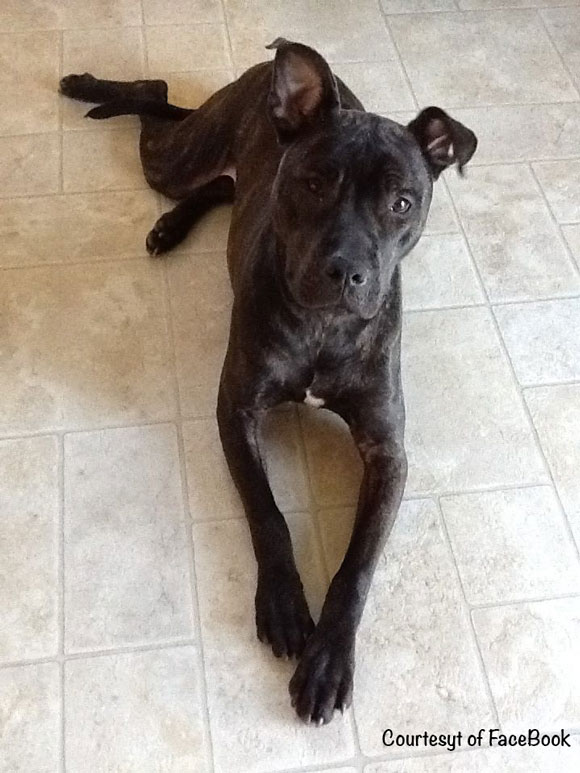 While he was gone social media was our conduit. FaceBook was our favorite means of communication. As the months rolled by Henry shared what he could, but mostly wanted to keep up with friends and family living in America, the land he took an oath to protect.

Somewhere during the summer months Henry started following “The Adventures of Harley & Leo.” I would always smile when he “liked” something on FaceBook.

Fall and winter came in with a bang, and like the postman, The Boys and I were out in the elements every morning, no matter what the weather brought us!

During those walks I thought of the supreme sacrifice Henry was making for all of us as I turned the corner where his house sat waiting for his return.

He was consistently in our thoughts and in our prayers.

So imagine my elation one January afternoon (as I’m “tossing” that final box of Christmas decorations into the storage room) when The Boys start barking once the doorbell rang.

Yup, you guessed it, It was Henry, he was home! It was great to see him again… 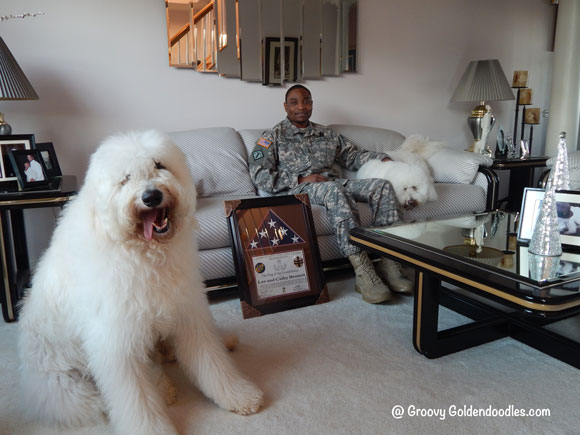 As if he wanted to participate in the conversation, Harley parked himself up on the couch and “refused” to move… 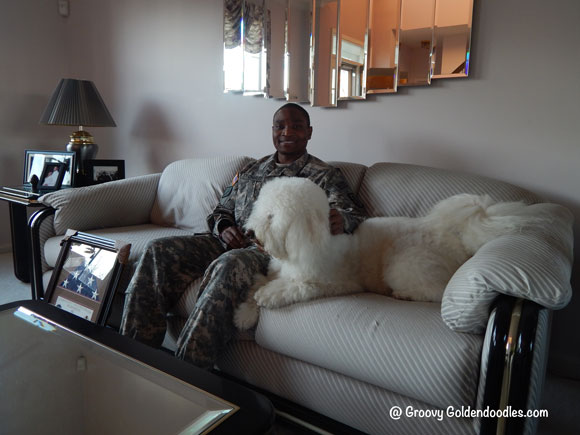 When Henry presented Lee and I with a shadow box containing an American flag flown over Afghanistan, we were both speechless…. 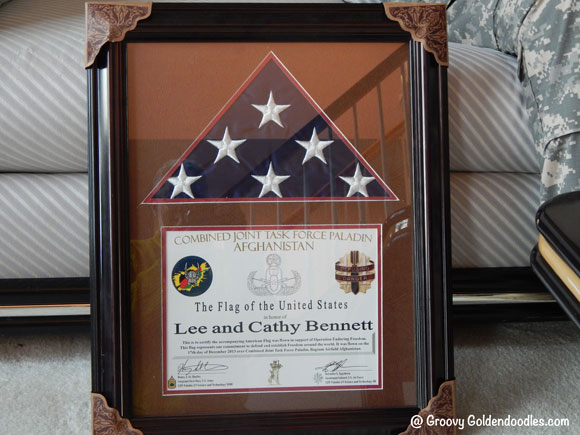 For a retired Infantry Officer, that was by far a “top ten” memorable moment that Henry bestowed upon my hubby… 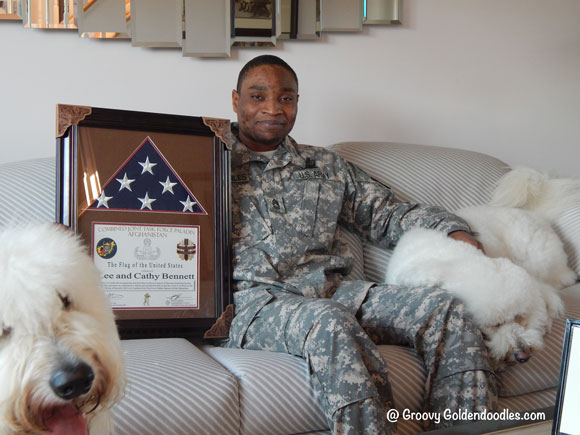 Eventually I got around to asking when Maximus was coming home. Since Henry just returned, I imagined it would be in a couple of days. I was totally floored and speechless when I heard him say: “Maximus is staying with his foster family.”

Apparently while Henry was deployed his good friends made the decision to relocate to a region with warmer climate. They wanted Henry to know they were moving out of the area, and they asked if they could take Maximus with them.

Henry knew his friends loved Maximus. After all, in the past when Henry deployed, this was where Maximus called “home” until Henry returned.

Maximus had truly adjusted well with them over the past nine months. Both of their children and a dog had come to see Maximus (now 2.5 years old) as a member of the family… 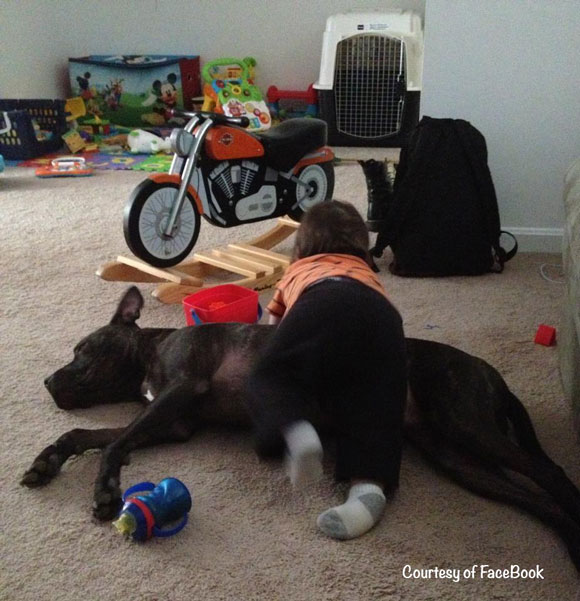 Henry knew an extremely difficult decision lay ahead. As a member of this elite unit he was well aware there would be more deployments in his future. He said he had to think about what was best for Maximus, ultimately deciding his foster family not only take him – but keep him.

I didn’t know what to say! But I looked and realized I didn’t have to say anything. Harley was doing all the talking. As Henry relived this story about Maximus, Harley nestled in so close to Henry as if he understood the loss… 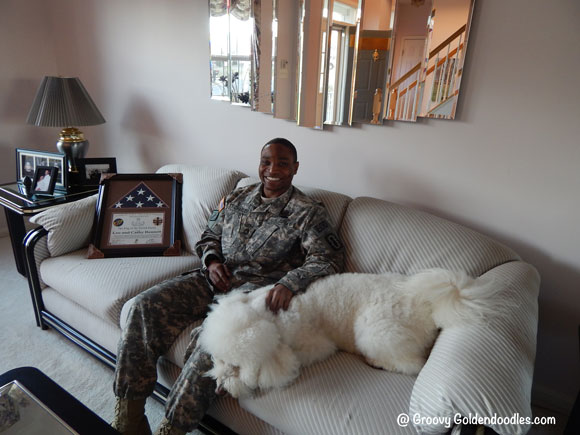 And pretty much for the rest of Henry’s visit, that’s where Harley remained. I told Henry he was welcome to come down and play with The Boys as much as he wanted now that he was back. I still owe him a traditional Charleston SC meal of Shrimp and Gravy with Grits (that’s right I said grits!).

About a week after Henry stopped by our house, he left again.

Oh no, not back to Afghanistan. This time he was headed home to see his mom, and hometown friends. But the first stop on his list ? You guessed it – a warmer climate and a puppy named Maximus!

I can only imagine the reunion.

Take care Henry, have fun, be safe and thank you so much for everything you do to keep me/us safe.

Here are some extraordinary reunions of a few soldiers returning home…