We were spending the night with a few family friends and one “itsy-bitsy-teeny-weeny” dog named Wyatt. The weight differential between he and Jaxson was huge – 70 lbs vs. 7 lbs, causing the question “does size matter between dogs?” to cross my mind… 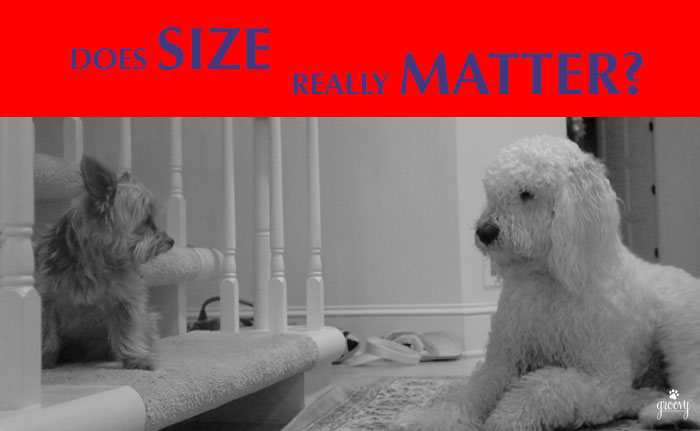 Jaxson has been around small dogs before. Remember Piper?… 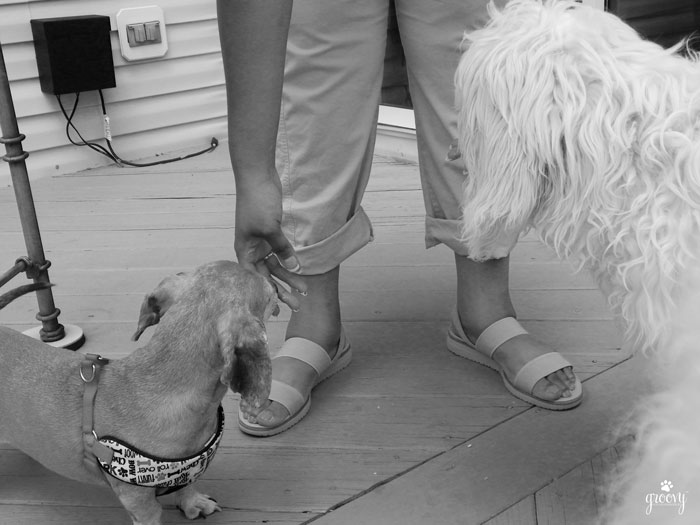 With the two of them, size just didn’t seem to matter, but then again Jax was only 5 months old!

At doggie day camp, dogs were assessed and grouped by disposition and personality – not size. That’s how my 98 lb Leo ended up with the small dogs. 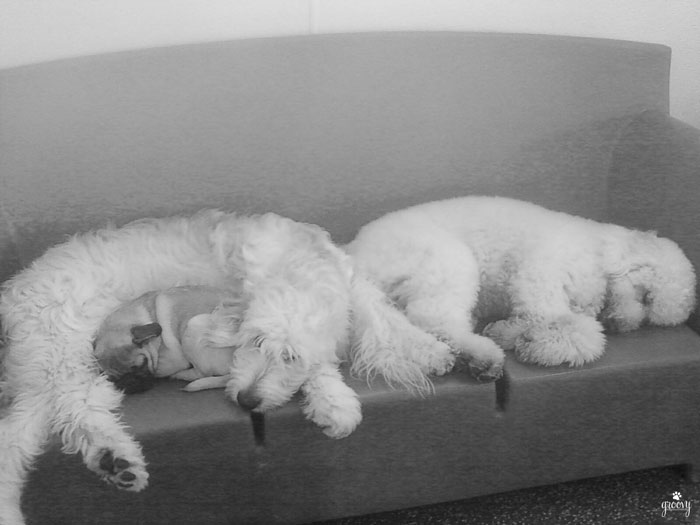 Leo was such a gentle giant, he couldn’t have been anywhere BUT “small dog camp.”

Before his first birthday, I received a call from the General Manager –

Cathy, it seems that Jaxson is too much for small dog, so we’ve moved him to big dog camp.

Apparently, after hours of playing, all the dogs in small camp were winding down in the late afternoon, but Jaxson’s engine was just warming up. And until we moved to SC, Harley remained in small dog while Jaxson played with the big dogs.

Jaxson had never met Wyatt, an eleven year old Yorkie. For that reason I wanted to make certain Jaxson would not – step on, run over, or try to play catch with him while we all lived under the same roof for 30 hours… 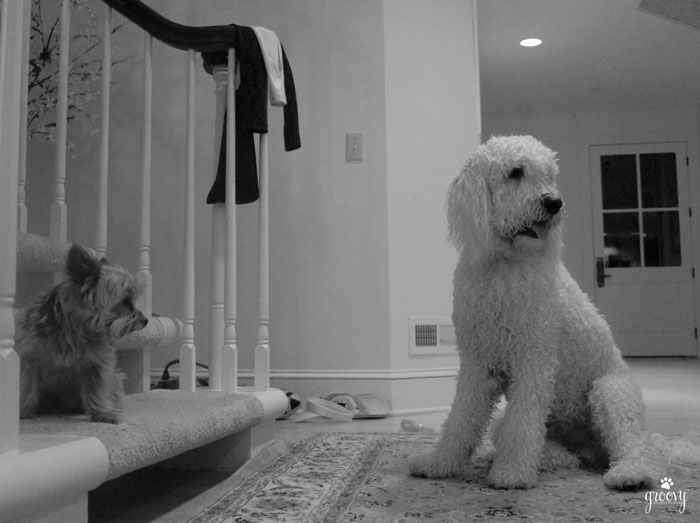 Let me clarify – Jax would never “intentionally” harm Wyatt. But he is considerably larger, stronger, faster and oh so clumsy when he gets excited. And another dog in the house along with three little humans is a recipe for excitement #doodlesteroids

– is the only way I could describe his behavior.

He was slow and purposeful to move when close to Wyatt… 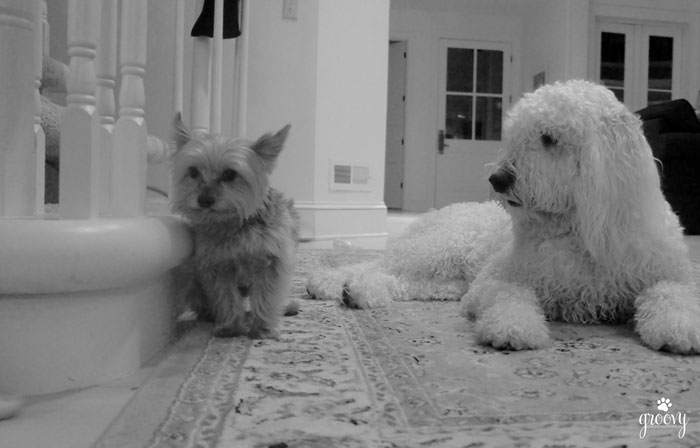 He played the role of a guardian. Tailed him like a detective. #DeputyDoodle… 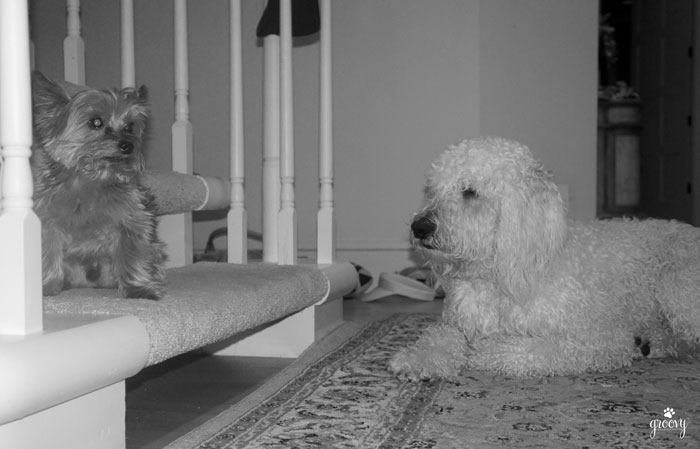 The stairs only worked one way for Wyatt – up! He wasn’t confident coming down. So he’d set up camp on the landing and Jaxson faithfully remained by his side until someone came to scoop him… 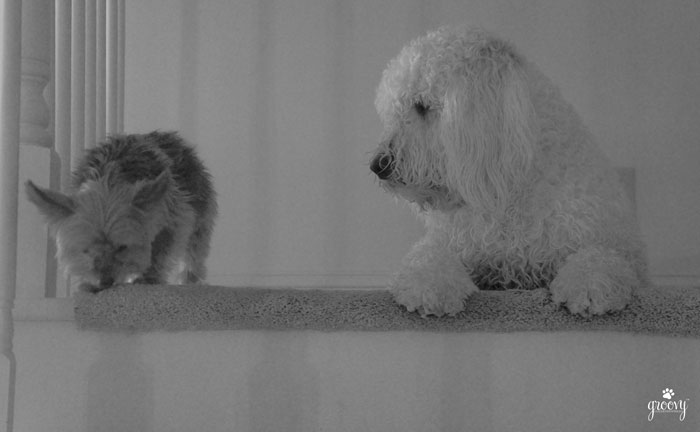 As I studied these two I thought a lot about Leo in “small camp” and wondered if dogs actually recognize their various sizes.

This theory may explain why dogs seem to run from Jaxson. His bark is unusually deep and throaty. Solicitors step back as he races towards the door. #Falkordoodle

While I found plenty of articles on this subject – the majority were referring to public dog parks and off-leash areas. #wedontgo

I recognize there are some dangers associated with large and small dogs playing together. For that reason I followed them around like a reporter from the National Enquirer. #paparazzipetparent

Eventually I realized after taking every precaution I could think of – these two were going to be just fine together, (or I just got weary and bored walking behind two dogs who wouldn’t sit still and the wine finally kicked in) 🙂

So, when it comes to large and small dogs playing together…

The idea that large and small dogs cannot play well together is untrue. And there is no scientific term for dog behavior called predatory drift. Big dogs and small dogs can play together on a regular basis, and big dogs are not destined to become predatory to little dogs. Source: Dr. Sophia Yin

We (as pet parents) should always exercise good judgement and caution in any and every situation when our dogs are in new environments.

There are plenty of sites available online offering “how-to” tips when introducing large and small dogs to one another.

I am not a veterinarian or a trainer, I just research then decide – “if in doubt – do without.”

Make this a memorable Monday – be kind to someone today!