On the 8th of March – I brought Jax home… 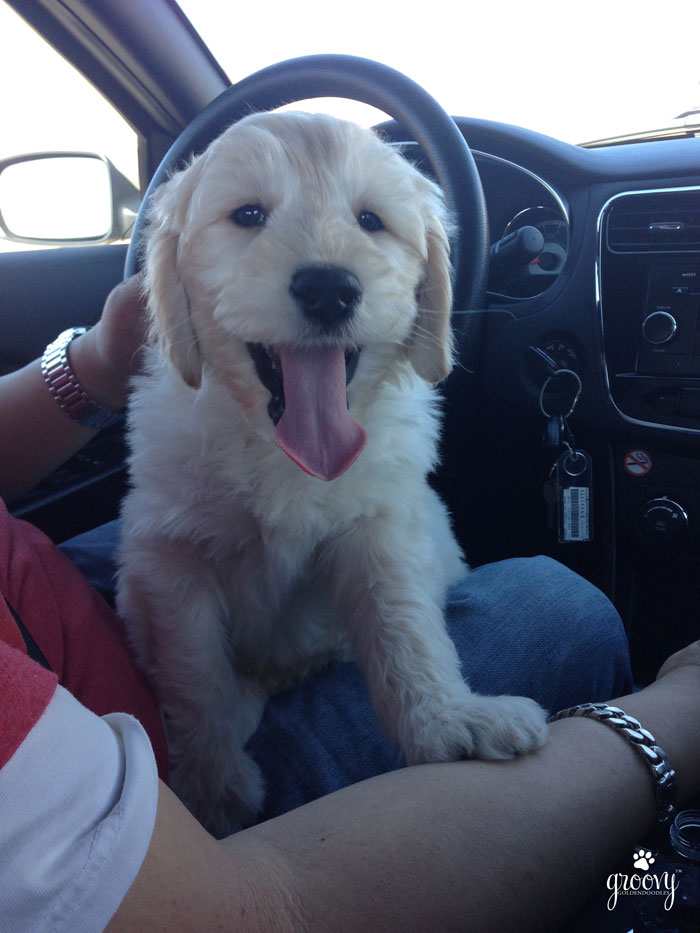 Even then –  I “sort-of / kind-of” knew there would be an adjustment period for he and Harley. But I was unrealistic with my timeline. I actually thought it wouldn’t take more than a day #stoplaughing #dontjudgeme

Four days later (and not much progress) my nightly conversations with God started or ended like this:

Please Lord, let tomorrow be the day these two start getting along.

My Grandmother used to say:

Be careful what you ask for – if you ask too many times, you just might get it!

For the next 14 days I prayed for “harmony” in my house – and then it happened. Nana’s words rang true.

Ruger the Peacemaker showed up.

Before you think I ran out and purchased a gun, let me explain. 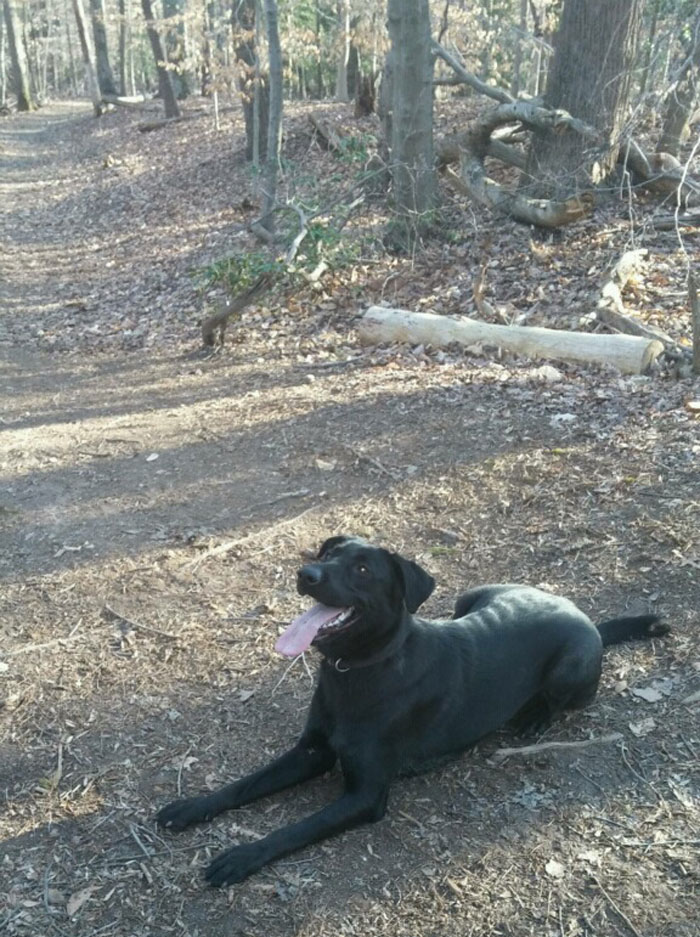 She’s not out in the front of the house often and come to think of it – I’m not sure if I saw her at all during the winter. But what I do remember is she’s always been a happy, playful pup, whipping her tail at a speed that can blur your vision.

On the 22nd of March, we saw the first glimpse of winters end. The sun was bright, our jackets were off, and the street was alive with noise. The children laughed while the adults gathered in small groups basking in the unbelievably warm weather.

I must confess – the night of the 11th when I first started praying for “harmony” in my house, I had no idea how it would arrive.

But let me tell you, I never thought it would come in the form of another dog!

Doodle Dad was sitting on the porch. Harley laid comatose by his feet after receiving the best belly rub ever. I sat on the steps battling with an active teething, nipping puppy while trying to follow a conversation between my husband and my neighbor. 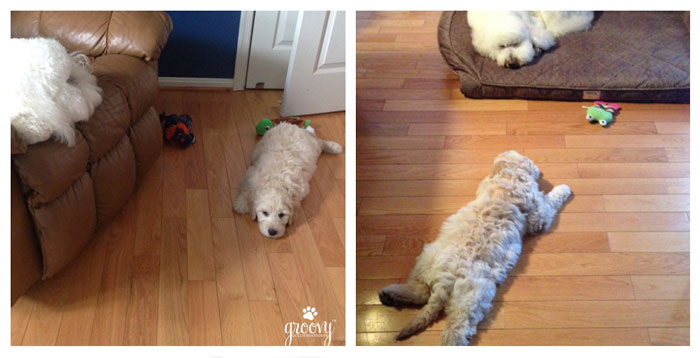 Harley was doing his best to stay out of Jax’s way, while Jax was working hard at annoying Harley. 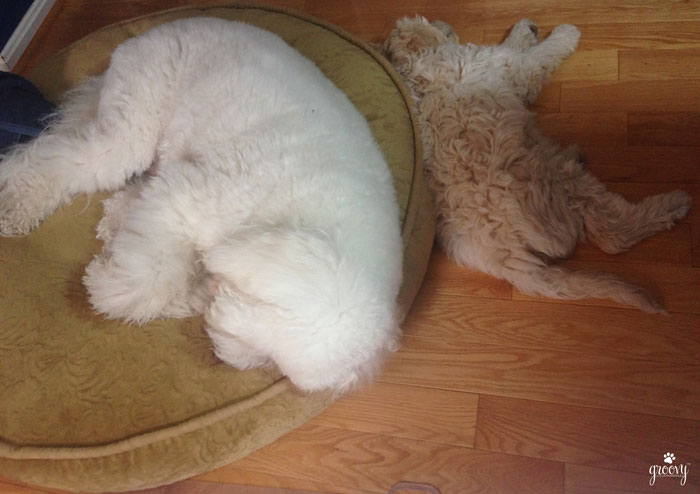 Ruger came outside for a game of catch with his pet parent. Playing on the lawn seemed to hold her interest until she spotted Harley and Jax across the street.

In less than a blink of a human eye, she darted (ball in mouth) across the street headed for my steps.

I scooped Jax into my arms simultaneously as I rose up off of the steps. NOT because I thought Jax was in danger. It was a reaction based on the simple fact that Jax hasn’t had all his puppy vaccinations, therefore “contact” with other dogs are prohibited according to his vet.

Harley must have interpreted my swift movement as a sign of discomfort and/or fear because he immediately escaped Doodle Dad’s grip and placed himself in front of Jax and I in a matter of seconds.

Understand, Ruger would never hurt any of us, we were never in any danger. But Harley was not allowing her up on that porch. #notthen #wasnthappening

The more Ruger danced, darted, bobbed and weaved – the more Harley blocked. This went on for several minutes.

If Ruger wanted to play on the lawn with him Harley was all for it, but the moment he even glanced in our direction, Harley was making himself a “doodle shield.”

The two dogs repeated these moves several times so I decided it made more sense to take a wiggling Jax into the house and feed him dinner. Harley joined us, Ruger went back across the street, and Doodle Dad resumed his convo with our neighbor.

The boys ate, and then it was time for a walk.

Back outside, leashed up and ready to go – we couldn’t walk. It was impossible. I couldn’t seem to keep them apart.

They jumped, they rolled, they tossed and they turned. I took 113 photos that afternoon! #truestories It was mind boggling. 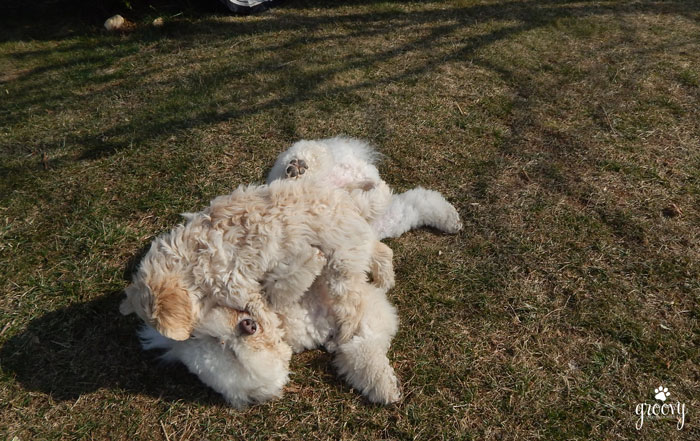 What just happened? Did the event on the lawn a few hours earlier make him Mustafa to our new Simba? 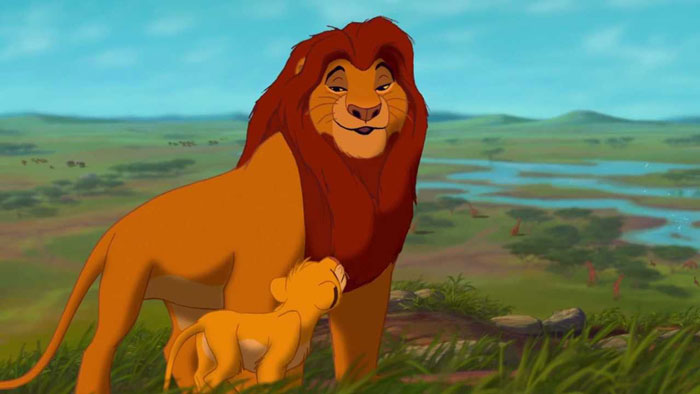 Whatever it was, I did not question it – I accepted it – I was grateful – I was happy! #heckyeah

I can only imagine even though Ruger posed no threat at all, Harley realized Jax was “family” and it was his job as the oldest to make sure his family was safe.

That’s my take – what do you think?

Be careful out there this weekend and as always, thank you so very much for sharing me with all your friends!