Not the “Restaurant”, “After Hours Joint”, or “Secret Shopping location” kind of “hot spot”. I’m talking about a skin rash on Harley’s tail!

Back in September (the 29th to be exact) I posted a blog entitled “For the Love of Harley.” If you didn’t read it, or forgot details, please refresh and review – the rest of this blog will make more sense and hopefully you’ll be able to help me out at the end…

After my Noah’s Ark adventure was over, I thought my life went back to whatever “normal” was supposed to be? Well turns out that’s when I became a “medic.” I know I described before, days after our ordeal, every few minutes Harley would drop to the ground and begin gnawing at his tail like it was an ear of corn. It didn’t matter where we were, on a walk, in the house, in the middle of playing with Leo – all of a sudden out of no where I’d hear this THUD and down he’d go. One evening my daughter investigated and found a spot (the size of a quarter) on his tail. His skin was raw and flaming red – (hence the name “hot spot”).

After some research I found out this skin inflammation or infection can come from various sources; excessive “biting”, “scratching” or “licking” an area caused by a bug bite OR an allergic reaction if your dog is allergic to something or has been exposed OR some animals have been known to “start” a hot spot out of boredom or stress-related psychological problems. There are many ways to tackle this, but a lot depends on what stage it’s in and your vet’s choice of treatment. For Harley, “Super Vet Learman” gave me a numbing powder to apply to the tail three times a day and after about three days, we were “good to go.” Here it is almost a month later and Harley has another flare up with a “hot spot” in the same general vicinity. Not to worry, I jumped on that thing like nobody’s business, and in less than 48 hours he was healed!

Curious as to why this happened again – I did the unthinkable…. I voiced my concerns with Tiffany. Why in the world did I ask the two legged child? Long, long, LONG ago she elevated herself as the Boys “medical proxy”, coming to me with all sorts of self proclaimed diagnosis for them from colds to sprained feet. You name it, I’ve heard it! She devotes her time (and energy) discovering ailments then contributes her viewpoint (whether I want it or not!) regarding their medical, emotional, and psychological well being, and now she’s completely left the stratosphere! In her professional opinion (profession being “pet owner”)She believes Harley experienced “separation anxiety” after the “great flood” causing his first flare up.

And this most recent “attack” (as she describes it) is because (now get this), I’m not spending enough time with Harley. After having Leo for an entire year – according to her – Harley is traumatized because he has to “share me!” This (so she says) is the underlying reason for the hot spot on the tail. I was so intrigued with this entire conversation, I asked (yes, I did) what did she suggest I do? And not to my surprise she had an answer (ha!). Harley needs “one on one” quality time with just me. She suggests I carve out an hour or so in the evenings and make it “our time.” When I think about the life they live, I could describe it many ways, but “traumatizing” ain’t one of the words that come to mind. “Blissful”, “elated”, “euphoric”, even “blessed” is more like it.

Here’s where you come in – please be the “Dr. Spock” for dogs and tell me what you think: Is Harley ready for an hour on the couch so he can share his feelings? Is he suffering from first born syndrome? Is it true – is it me? Or has a bug bite on the tail simply gone wild?

Here’s a pic of the “neurotic” Harley and his “nemesis” brother Leo “chillin” in Doodle Blog Headquarters as I type this up (call it “Exhibit A”). 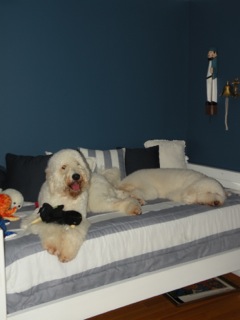 Your comments are welcomed and necessary to help with my defense summation!

PS: Back to blogging twice a week – Monday & Thursday, so subscribe for updates!  Thanks for reading…

PSS: A “special” WELCOME to the “Boys” first advertiser OTPR.