It’s Sunday morning and we’re headed to church – I stop by my daughters room and ask her to “feed the boys” for me. It is way too early for them to eat and if I fix it and leave, they won’t touch it!

A mere 90 minutes later, all my plans for the rest of the day go right out the window…. Instead I am playing stay at home vet nurse to Leo.

When we arrive home from church, we find the boys and Tiffany sitting in the foyer on the floor looking like they’re friendless, and Tiffany is examining Leo’s paw. When we enter the house, she starts confessing. She’s talking so fast, I’m only able to get every third word/phrase: “nice day” – “tennis courts” – “kids” – “lacrosse” – “paw.”

My husband asks her to slow down and start over again, and the story begins to make sense. She tells us after we left she gave them breakfast, and they were full of energy so she decided to take them to the tennis courts because it was a nice day.

When she got there, they ran around a little bit, and then some kids came over to them. They were there to play lacrosse and asked if the boys could join them. My husband interrupted asking if they played on the tennis courts? When she said yes because the area is fenced in – he began to lecture her on the “etiquette of tennis” meaning, “dogs do not play on the courts!”

Back to the story…

She said they played for a good while, running and retrieving the ball. According to Tiffany, Harley is showing improvement with actually “returning” the ball, and Leo is really growing more confident interacting with humans.

So I asked her what was the problem and why was she rubbing Leo’s feet? She said ever since they returned home, Leo has been favoring his front right paw, and will not stop licking it. I took off my coat and grabbed my glasses (“face fashion” for the over 50 is what I call them), and I took a look. 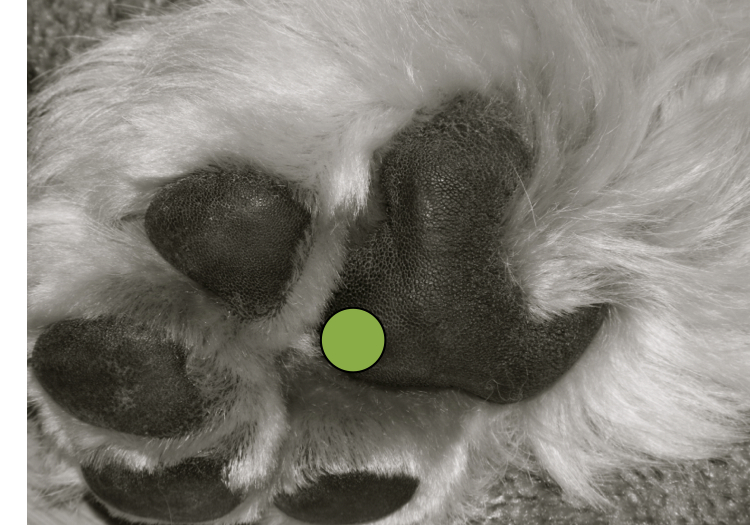 That green spot on the picture above represents the location on ALL four paws that are rubbed “raw” from Leo’s tennis / lacrosse match on the asphalt this morning! As I try to examine all four paws, I’m talking to Leo (yes, talking), as I would a child, and all of a sudden I hear whimpering. I look at Leo first (probably because that’s who I was talking to), and then I realize Tiffany is behind me on the steps crying and babbling about how she’s injured him.

Both Leo and I stop still and just stare at her, as if to say “are you serious?” It was an accident for goodness sake AND I am sure he will live, and now we know no more tennis courts. But in the meantime, can you get it together please so we can treat the paw?

Once upon a time Harley developed a wart in between his pads, the vet told me to apply Vitamin E oil on the area three times a day – I did, and the oil seemed to give him much needed relief and the wart dissolved in about two weeks. I am using the oil on Leo’s paws today because it seems to be soothing, it’s all natural so it will not hurt, and he seems to get some relief from the lubricant. This evening I shall apply some “neosporin” ointment so he can make it out to the lawn to “potty.”

Tiffany has already volunteered to take him to the vet tomorrow just to be on the safe side (don’t want to complicate matters with infections, etc…)

I did however find out online:

“Dogs often slice off the black pigmented part of their main foot pads during exercise. When this happens what should owners do?”

This was – part of – their answer from http://www.provet.co.uk/petfacts/healthtips/grazedpads.htm

“During the spring and summer months veterinary practices often see dogs that are lame because they have sliced off part of the black, protective, outer layer of the foot pad . This usually happens because the dog has turned suddenly whilst running at pace, and the pad is scraped off on a hard, rough surface.”

So, no camp tomorrow for Leo (Harley gets to hang out with his girlfriend Samantha in peace!), and off to see my SHERO VET whenever she can fit us in.

I will let you know what we find out, and what’s the best remedy for this freaky accident.
Right now Leo is chilling on the guest bed, waiting for me to finish this blog so he and I can “cuddle” some more…