With the holidays hovering over us like a UFO, the five letter “buzz” word around your house right now (not mine!) could be “p.u.p.p.y.” I am not the one to tell you “when to get one”, or suggest that the holiday season “isn’t the right time”, these major decisions are totally up to you, your family, and your lifestyle. I will however strongly recommend you read up on the pro’s and cons of crating a new addition (the four legged kind) to your family regardless of its age.

According to the “AMERICAN DOG TRAINERS NETWORK”:

“Providing your puppy or dog with an indoor kennel crate can satisfy many dogs’ need for a den-like enclosure. Besides being an effective housebreaking tool (because it takes advantage of the dog’s natural reluctance to soil its sleeping place), it can also help to reduce separation anxiety, to prevent destructive behavior (such as chewing furniture), to keep a puppy away from potentially dangerous household items (i.e., poisons, electrical wires, etc.), and to serve as a mobile indoor dog house which can be moved from room to room whenever necessary.”

Crates come in a gazillion different styles and sizes. I personally prefer the open wire version that allows you to move the interior wall as your dog grows and he can also survey outside his area from all four sides. If the crate is too big in the beginning it defeats its purpose for potty training and imagine how terrified he could become should you drop something from behind the solid wall version and he never saw it coming….a bit scary huh?

Color me a bit crazy, but I also took the rag or blanket I “donated” to his little condo and rubbed it on my arms so my scent was on it. This is also another form of “bonding” through smell. My scent then became identifiable with “comfort.”

With both Harley and Leo, (especially Harley as the single pup), the crate really did become a place of solace for him. After only a few months he frequently retreated there, voluntarily, to rest or just take his favorite toy and spend some quality time “alone.”

Although it may sound cruel, trust me – for a canine it’s just the opposite. Dogs love their crates, and I kept mine up for an entire year with the door wide open, allowing them access during the day whenever thy wanted it.

And if the proof is on the pudding, check Harley out – I believe in his mind he’s lounging on the beach in Turks & Caicos watching the clear salt water waves, waiting for a cute poodle in a bikini to prance on by… 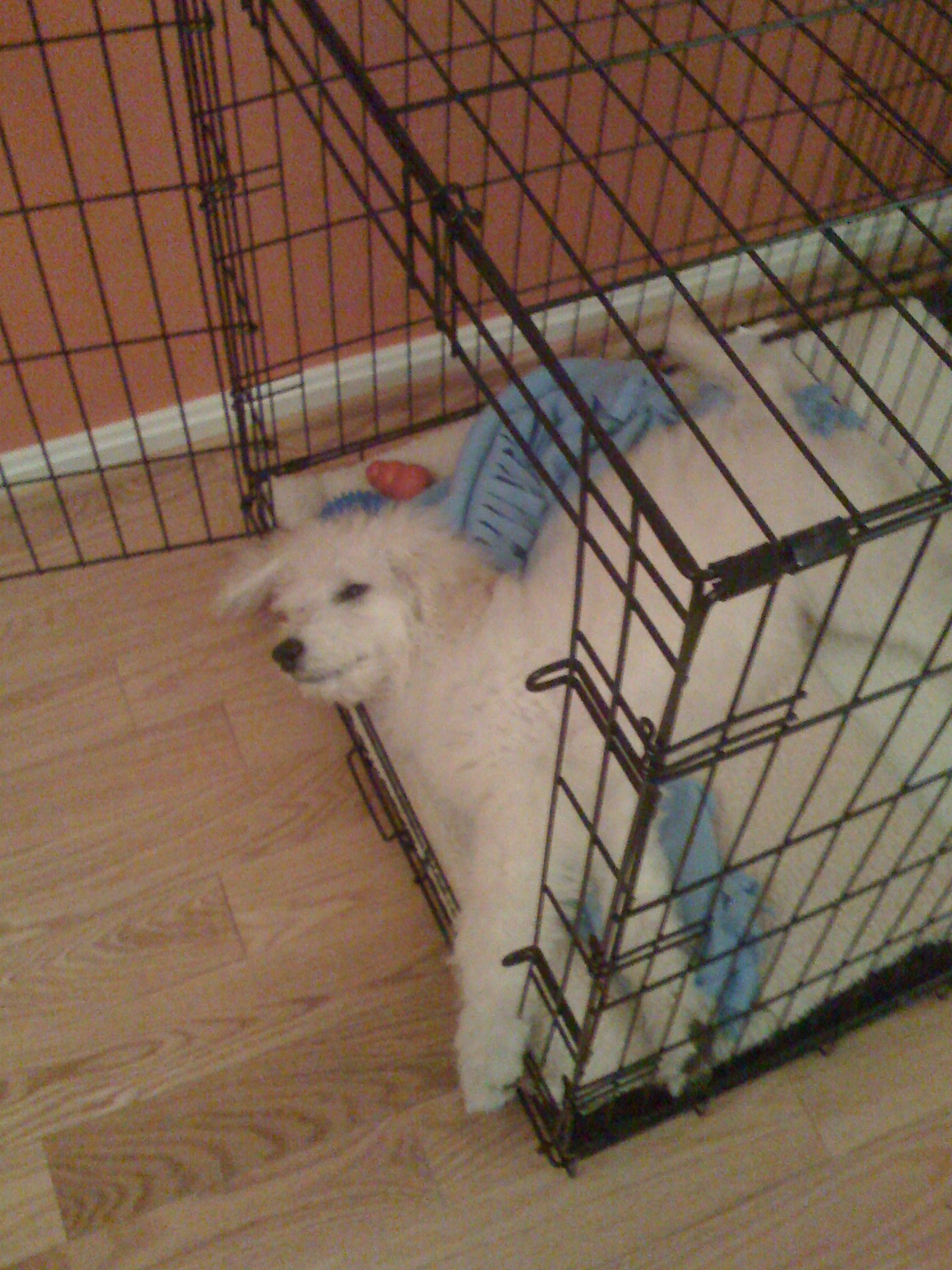