Have you ever wondered about a dogs episodic memory capability? …

While the Boys and I were on our Just the Three of Us tour – there were plenty of places and people I wanted to see.

As I mapped out our schedule, I found myself adrenalized at the thought of taking both Harley and Jaxson back to our old stomping grounds.

But would they remember anything, anyone?

Episodic Memory –  is the memory of autobiographical events (times and places). The collection of past personal experiences that occurred at a particular time and place. Source: Wiki

For years, scientists thought only humans (and possibly apes) could remember recent events not directly important to them.

If you ask me, dogs deserve a place on this list, let me tell you why –

As I turned the car onto the street of our old home, Harley and Jax were both perched by their respected car windows.

Because we lived in the bottom neck of a cul-de-sac, leashes were rarely worn when we were outside. So when I parked at our former next door neighbor’s house and let them out they instinctively did what they remembered.

Uninstructed Harley ran for our front door, and Jaxson ran to the gate of our backyard.

The significance of their maneuvers is huge. Harley was a front porch, lay on the concrete and catch some sun rays kind of Doodle. Jaxson was the wild one who loved to run up and down the hills of our 1/2 acre backyard.

Those photo bubbles are from years ago….

Many experts suggest our precious pups may have more advanced memories than we could ever imagine. I tend to agree.

There was no way I could have slipped into the State of Virginia and NOT taken the Boys to their true “home away from home” – Olde Towne Pet Resort!… 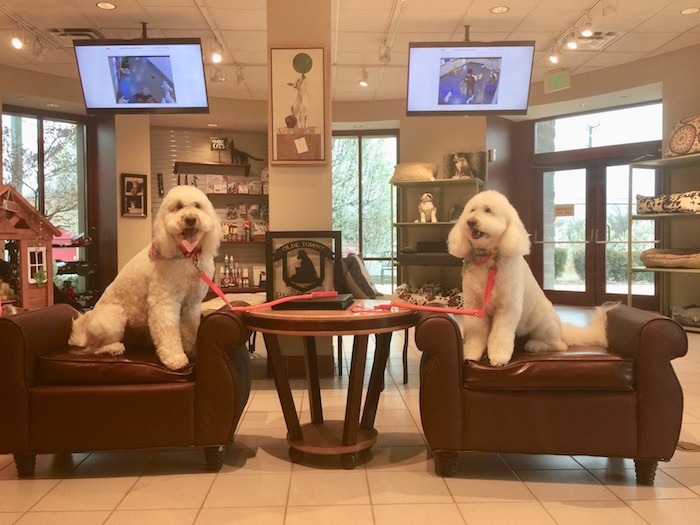 Harley grew up at OTPR. I was a 40 hour a week working woman when he was a puppy, I didn’t want him home alone at 4 months of age. Leo and Jaxson fell into the same schedule until we left the area.

Their reunion was crazy… 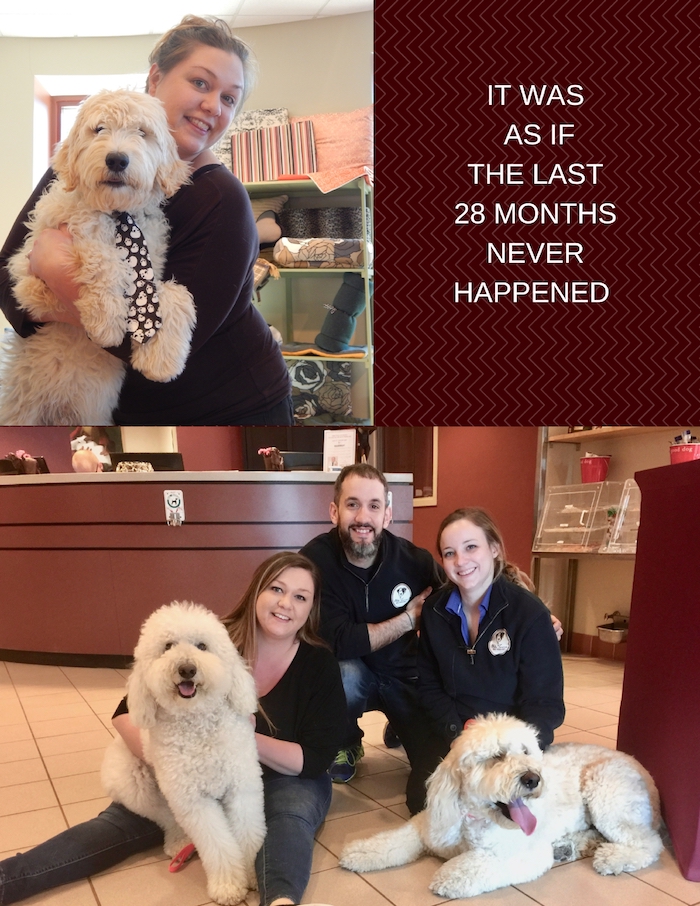 Harley “hopped” around in true Doodle Rabbit fashion and leaped completely off the floor when someone from his former years came into the lobby area to say hello.

The moment that melted my heart was of course seeing Harley and Fernando Lobo. Fernando was Harley’s sole groomer for close to six years. I honestly don’t know who loves whom more… 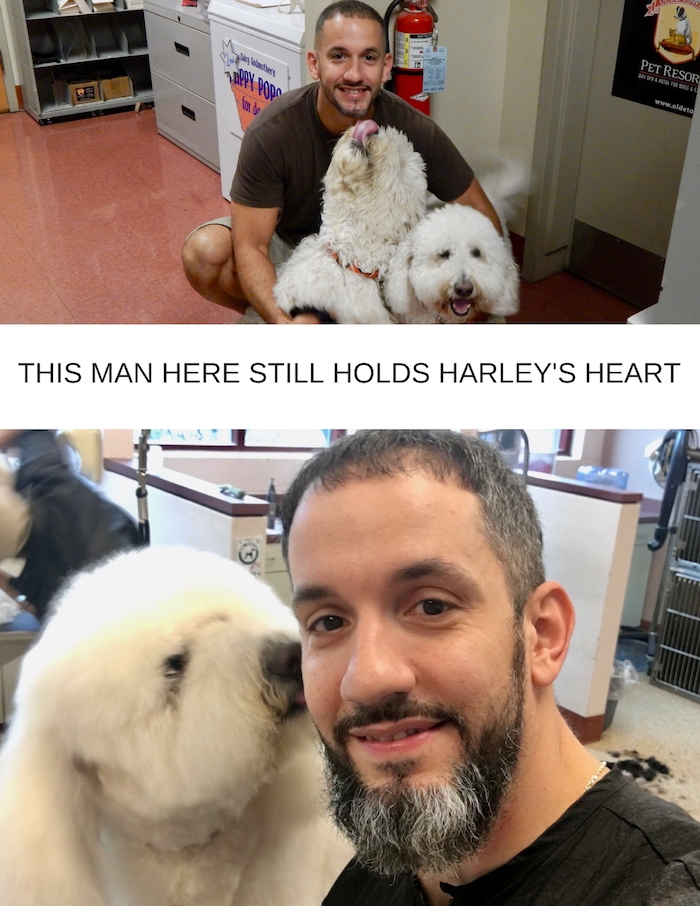 Lord knows my photo library holds thousands of photos of the Boys. My all time favorite is the one I use on my website’s “Contact Us” page. This precious little girl allowed us to place peanut butter on her nose to capture this magnificent pose.

It was doodlelighful to see her and the Boys interact again… 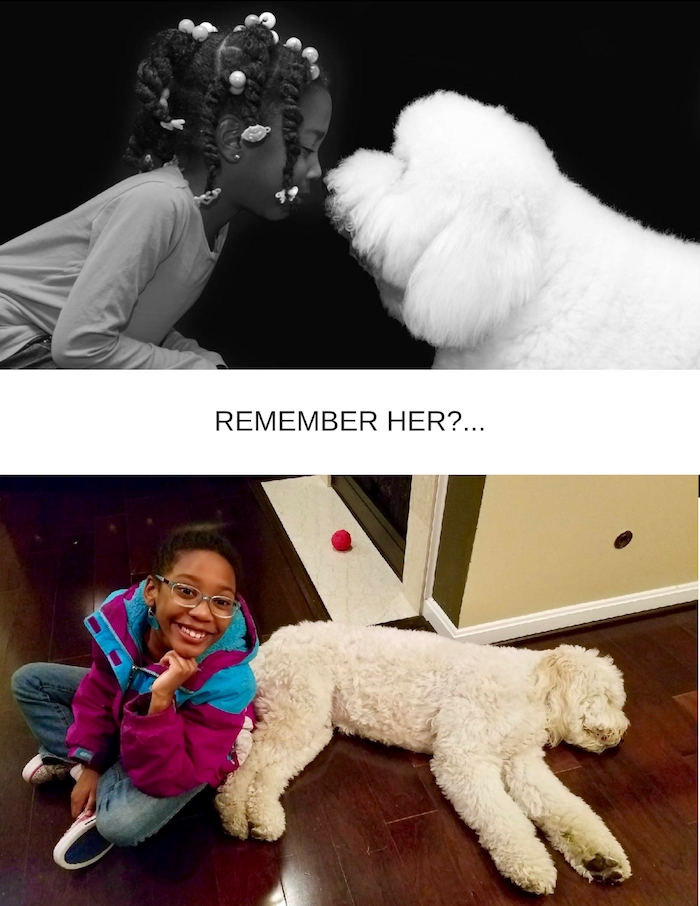 My Boys are very friendly. But I can always decipher the –

Nice to meet you

OMDoodle it’s so good to see you again

There are two forms of “explicit memory.”

We use episode memory to recall information we’ve consciously learned or memorized (example: when your friend asked you how was your trip that you took yesterday).

We use semantic memory to recall information we’ve learned or memorized (example: studying for that final exam).

With us, episodic memory has been linked to self-awareness, but since we don’t know whether dogs have the ability to be self-aware – experts call it “episodic-like memory.”

Whatever the case, I believe it’s there. Not sure the depth of memory, but somethings there. Why else would Jaxson run over to the retail display and jump in the pool like he did all those years ago LOL…. 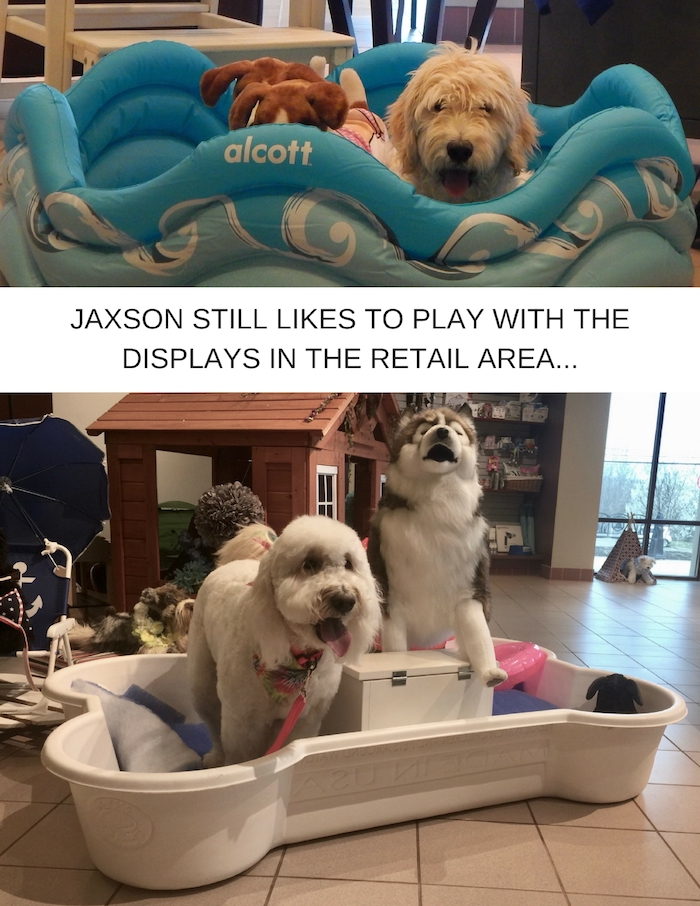 Have you noticed signs of “episodic-like” memory with your pooch? Do tell…

Make it a great week – be kind to someone ❤