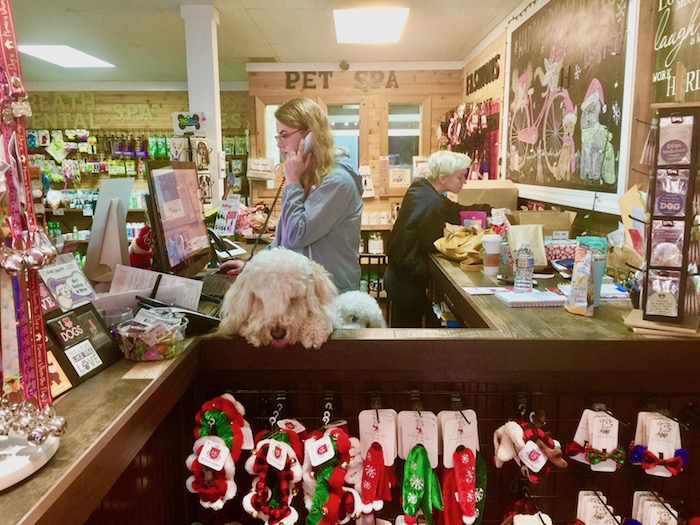 She shook her head and walked away! #shedoesnthavepets

The first weekend in December the Boys take Holiday photos because Doodle Dad is serious about his Christmas Card tradition.

Each year I search for a new accessory – but for larger dogs, items are still quite limited. #andIdontsew 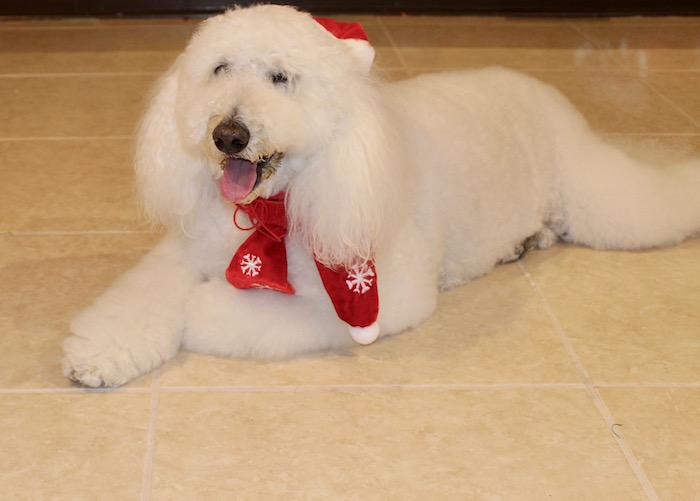 When I saw what this one looked like on Harley I dared not try to jam Jaxson’s head in there.

Maybe it’s all his fluff, but when I look at the reindeer headband on Harley, I see images of the Easter Bunny… 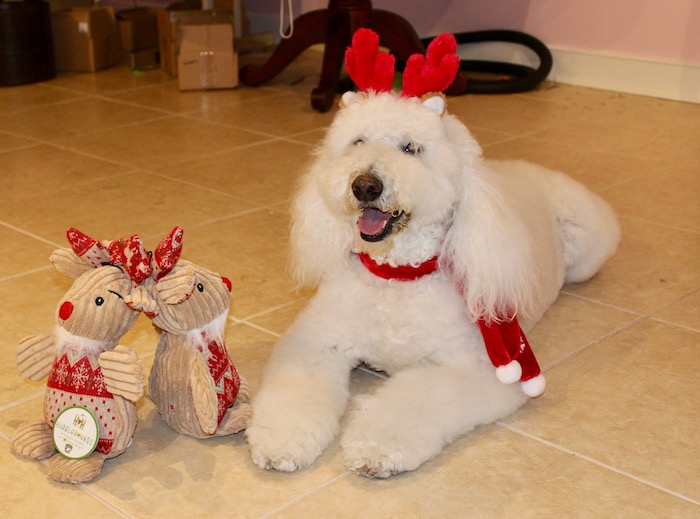 Harley’s always been that “nothing phases me” kind of Dood. I sometimes take that for granted. 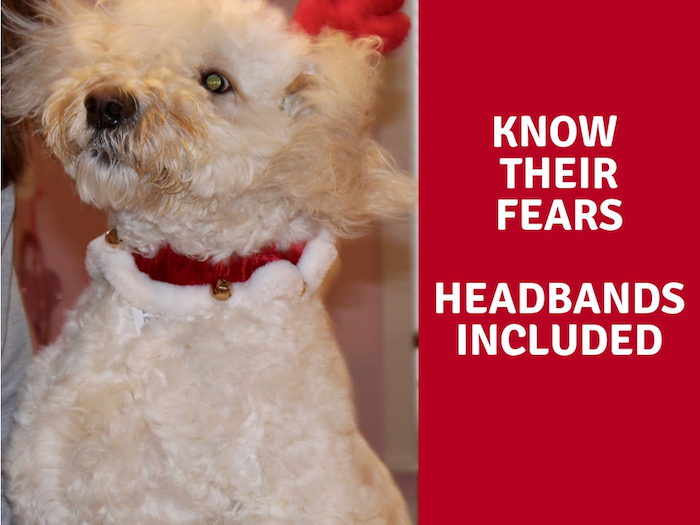 Jaxson’s never worn a headband before. I failed to take that into consideration. My assumption caused quite a ruckus – initially. He shot straight up in the air. #rocketdoodle

Jax wears raincoats and he has worn sweaters before. I’ve even placed an old cap of Doodle Dad’s on his head to snap a photo – he’s never fussed at all.

Obviously the elastic which holds the headband in place should have been introduced before I pushed it over his head and under his chin. Apparently there is a process when you want to put a new article of clothing on your dog –

Even though the experience was “less than” enjoyable, I didn’t want it embedded to memory as a terrifying one. 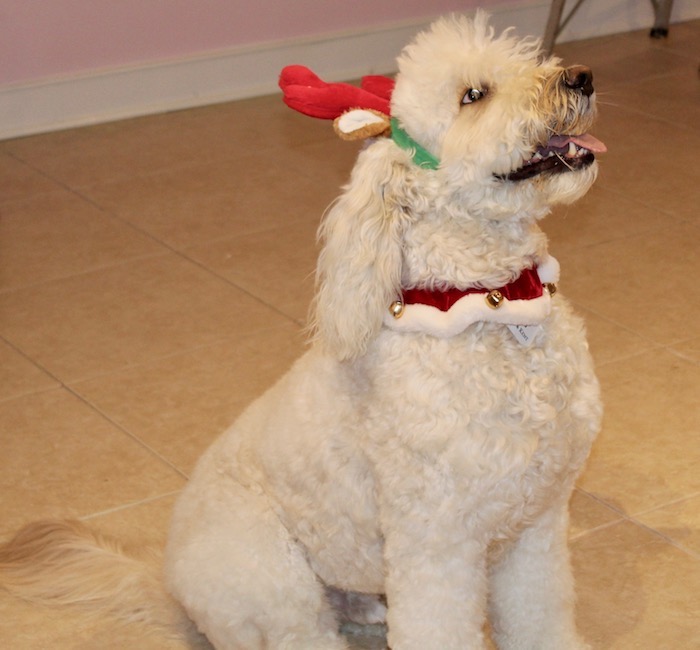 Jax is very food motivated – peanut butter and cheese snacks did the trick. However, I will probably never put one on his head again. #respectthedoodle

Whenever you’re dressing your pet for festive occasions, costume safety is a must –

I did find a larger hat and tried it on Harley… 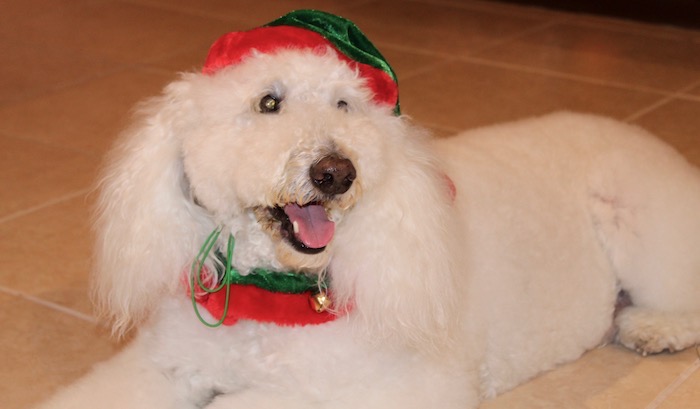 He looked more like a French artist to me, I just didn’t get that “holiday feeling.”

Whenever I’m taking photo’s of them, as soon as they give me that “I’ve had enough” look, we stop.

This would be one of those looks… 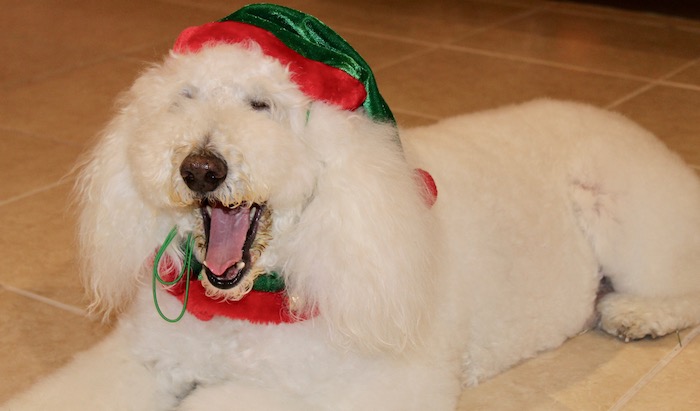 On December 8th, we will more than likely choose holiday scarves #again and I will placate them to pose differently with Santa Paws.

Hats, headbands, sweaters and such are just not part of our wardrobe.

But I’m okay with that… 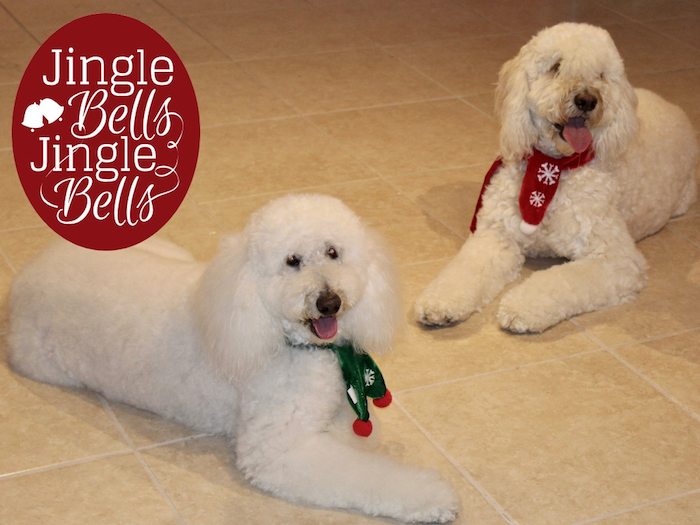 Follow the Boys with their Advent Calendar for Dogs as they count down to Christmas!

Daily photos can be found on –