As Harley promised in “his” blog – “A Night With The Stars”, I’m blogging to share our family’s heartfelt “holiday DC tour.” Even though we live in the area, even though it was 39 degrees outside, even though this was the birthday of Dr. Rev. Martin Luther King, Jr. and the place would be PACKED –  we collectively agreed days ago that we would bundle up, grab the boys and go to the newly opened MLK monument and experience what so many people from around the country have traveled to do on this same day.

As we rode in the car, I reflected on how fast time has “flown” by. I remembered as a child listening to Dr. King with my parents either on the radio or watching him on that old black and white RCA “console” television (you remember – the one with the huge knobs!). As a child I was enamored and mesmerized by his presence, and I remembered how much I loved the rhythm of his words. As I reminisced, I found myself getting anxious in the car.

Once we found a place to park a “gazillion” miles away, for Leo, this was exciting. My little 80+ pound baby was in the city for the first time – he was happy! 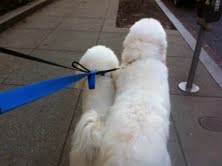 When we finally arrived at the monument, I was able to get a shot of the boys by the entrance wall. 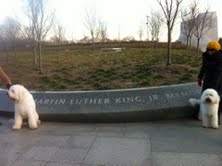 The cutest little boy ran up to them and AFTER he petted both Leo and Harley, he looked up and asked “can I touch them?”

We took turns going through the monument site and while we did, the boys had their own “tourist attraction” thing going on by the wall (can we say “photo shoot”). 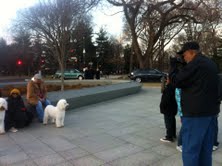 He played with the babies… 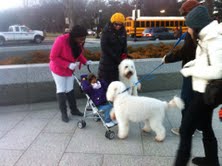 They allowed everybody who wanted a little “Doodle Time” to have some! 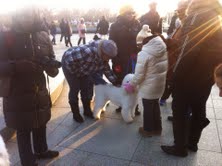 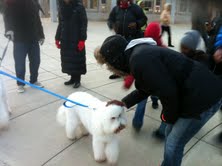 Even if that meant strangers holding their lease for their own photos! 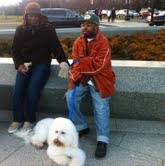 Our family had multiple times to walk through the monument area to view the spectacular sculpture. To look at the detail in the stone work. The likeness to the man that was captured is breathtaking; you can see the twinkle in the corner of his eyes, the vein lines in his hands, the strength in his jaw. Even the crease in the sleeves of his suit jacket are visible. Nothing was overlooked. But the best part was the “peace” that seemed to float throughout the area. The kindness in everyone’s voice, the smile on everyones face, and the friendliness that radiated from everyones spirit. If only we could capture, bottle, and spray that in the air around the world….

It was a good day, despite the temperature, the hike back to the car, and all the dirt the boys seemed to find on the bottom of their feet! I loved, loved, loved, that tiny piece of Dr. Kings dream that I found, enough to sustain me and rejuvenate my faith that this nation IS making strides towards equality everyday, and there IS hope for our humanity.

Thank you Dr. King for your dream, rest well on that mountaintop

And the boys? They had a blast – even if they never got inside! 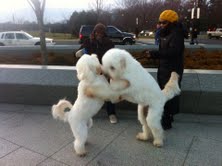