Father’s day rolls around and the two legged dependents decided their father needed an activity, so they purchased a bicycle.

Now don’t get me wrong, I thought it was an excellent idea. “Eat sensibly and exercise” we’ve all grown up hearing those words, right? But I took a great idea and all by myself – ruined it!

Let me explain…. Whenever Harley sees wheels, yes wheels, he goes CRAZY!. Not just any set of wheels turns him on, he is very particular with his spokes. He loves motorcycles, the louder the pipes and the shinier the rims the better (must be his name!). Bicycles are a particular afrodisiac with him, any car with a bad muffler will steal his heart, and for goodness sake don’t ride by in a pick-up truck – he will lose his fuzzy little mind!

I decided to piggyback on the kids gift idea (should have gotten a tie) and I purchased (yes I did) a flaming red doggie carriage. What on earth was I thinking? The kids tried to detour me to an alternative gift selection, but did I listen? Nope! Looking back on this fiasco – how could I have believed this retired career Army Officer would want to ride a bicycle while pulling a perfectly healthy puppy behind him in a carriage no less, complete with a window and air vents on the side? Are you getting a visual yet?

The 3rd Sunday in June rolled around, and it was time for the gift presentations – I knew instantly this wasn’t one of my best surprises. Oh, he loved the bike. My husbands father rode a bicycle all the time, and would take each of his grandchildren along as they got older as a rite of passage. I could see those thoughts looming in his head, until he caught a glimpse of the canine contraption over in the corner of the garage. As I explained (or defended) my gift, I also tried to justify the concept by telling him this would be such a thrill for Harley because he loves wheels – yada, yada, yada…

He patiently began the chore of attaching the few parts necessary so he could then “hitch” this thing to his brand new bike pretending (beautifully I might add) to be elated (did I mention that my husband is one of the sweetest people I know?). Like a space shuttle launch – it was finally “test time”.

Lee rolled the bike and its attachment out to the street, and summoned for Harley. As “Sir Doodle” pranced down the driveway, you could almost hear the theme music from Chariots of Fire playing in the background. With just one glance at the bicycle and carriage, he began to hop around like the Easter Bunny. This scene ALONE generated attention and quickly became a major event for my block.  The neighbors came out, I had my camera, and we were ready for the “count down to lift off.” We let him survey the capsule first, he walked up to it, sniffed it, I think he even looked through the window! 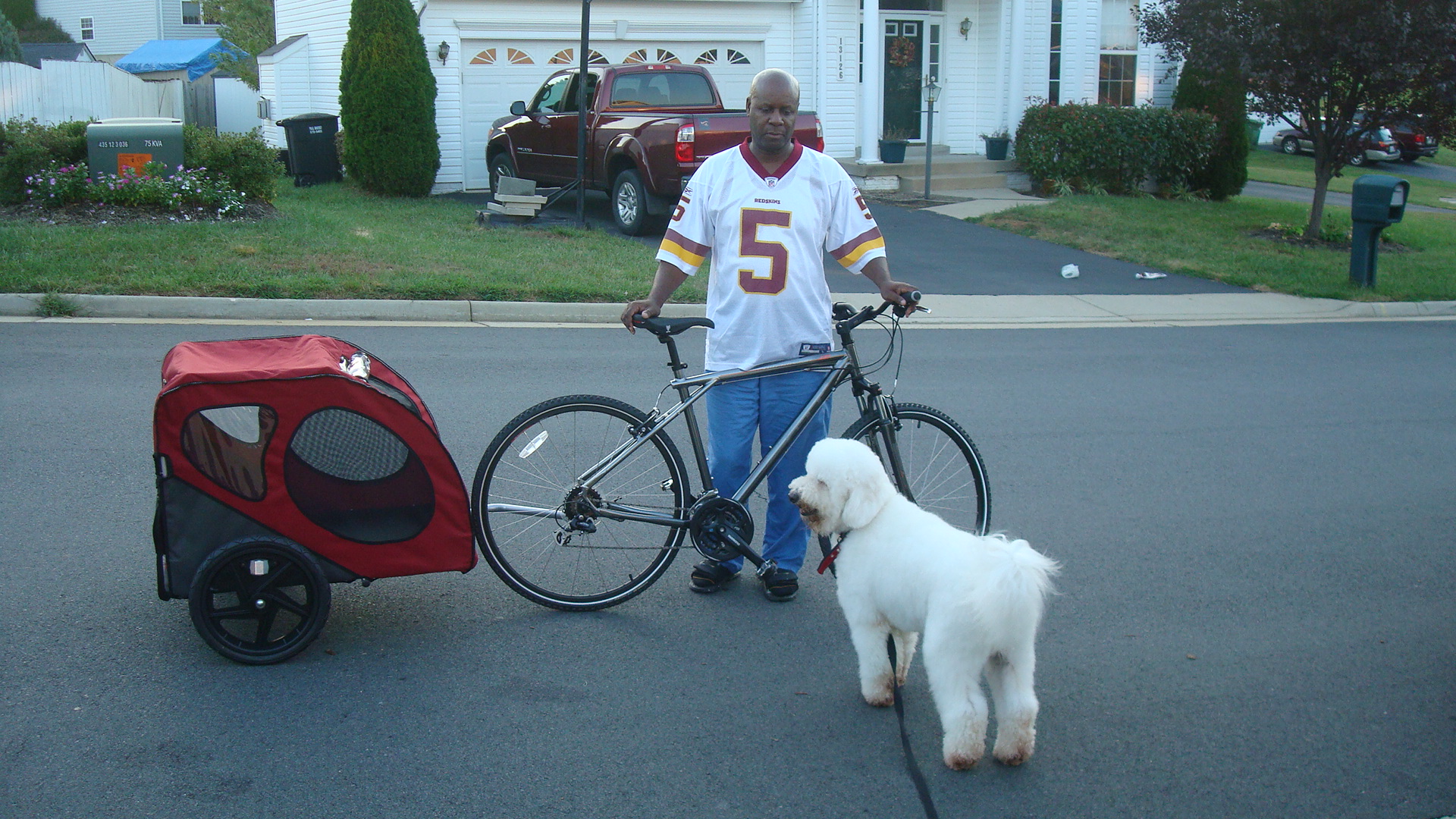 I didn’t have any degree of difficulty getting him in – (come on now – I travel with treats!). But once he got in – OMG! He freaked out!! My happy little bunny became the “Tasmanian Devil.” All he wanted was to sink his teeth into that rear tire. I yelled for my husband to go faster but speed didn’t matter, he would not stop barking and jumping around. The carriage was rocking back and forth like a firecracker about to blow! I can’t say he was afraid, but he wasn’t having fun either. 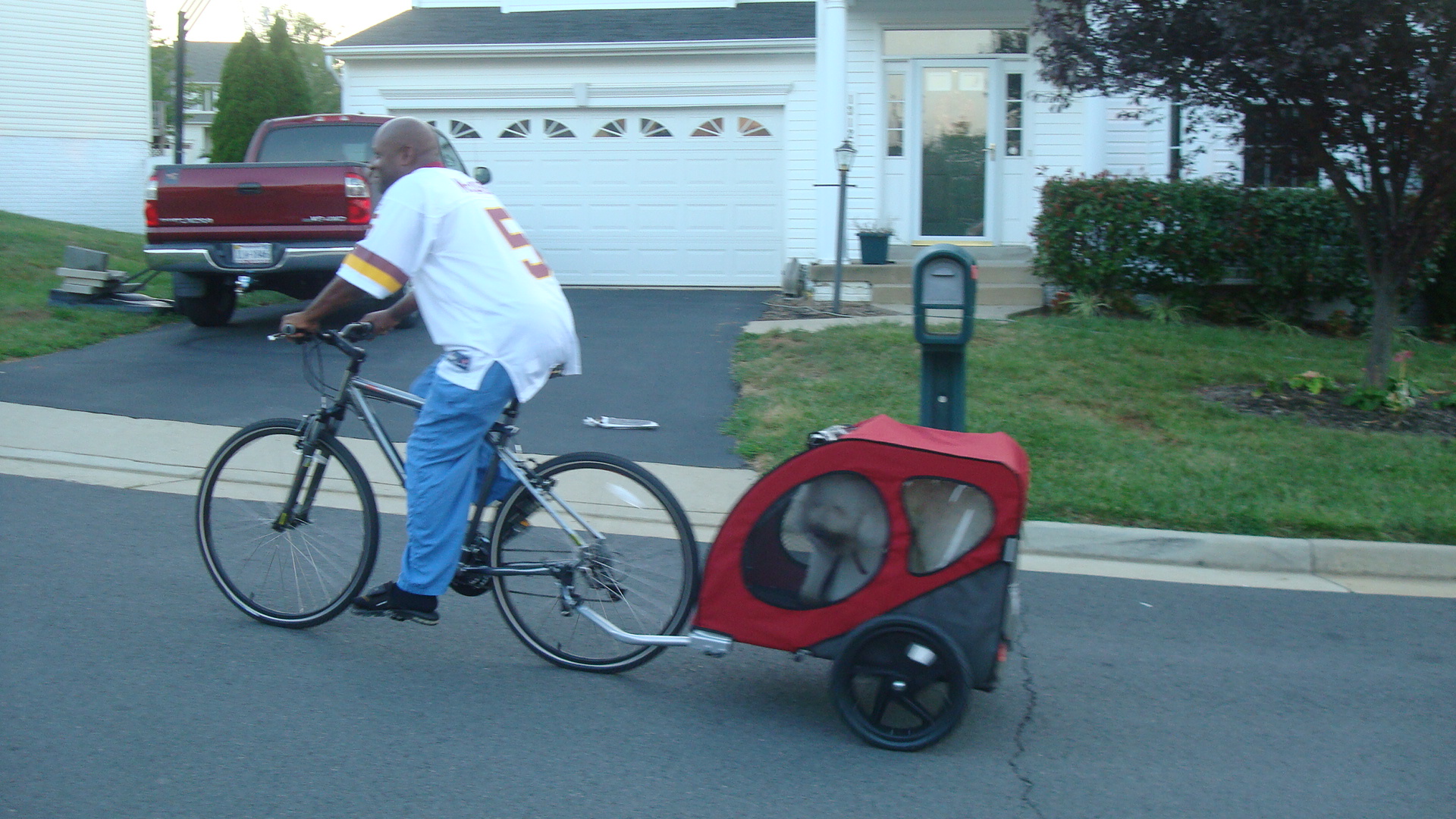 Because of his obsession with wheels riding behind the bike was more like a tease (like a carrot dangling in front of a horse). By the time they got back, (never really left the neighborhood) he was worn out and exhausted far worse than my peddling husband.

When I unzipped the little doorway, he leaped out like a jack rabbit and didn’t stop running until he reached the front door.

The red rocket has never seen the streets again.

Let the bidding begin, we will take the best offer…. ANY OFFER!

SIDE NOTE – Leo’s swimming lesson on Wednesday was awesome. For those that weren’t able to tune in, we’ve got video coverage (yes we do!) and will post in a couple of days.   Have a great day, and share their blog!